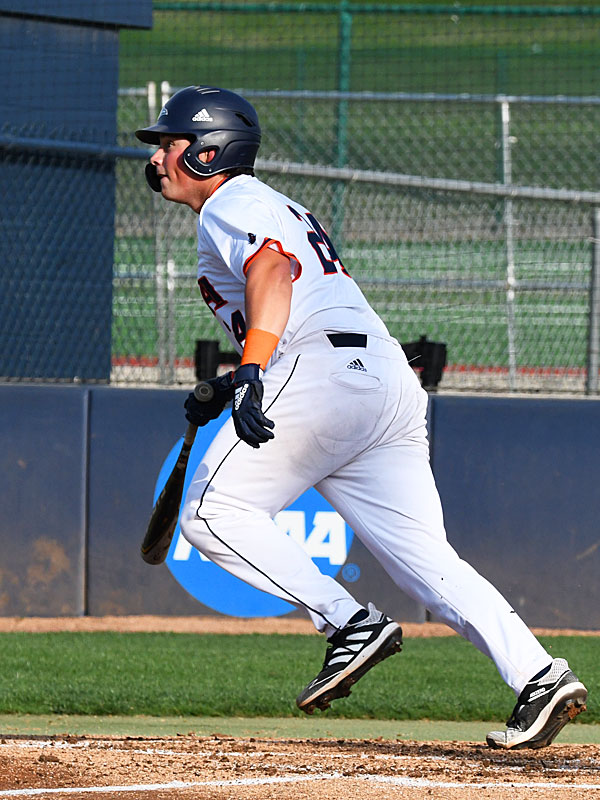 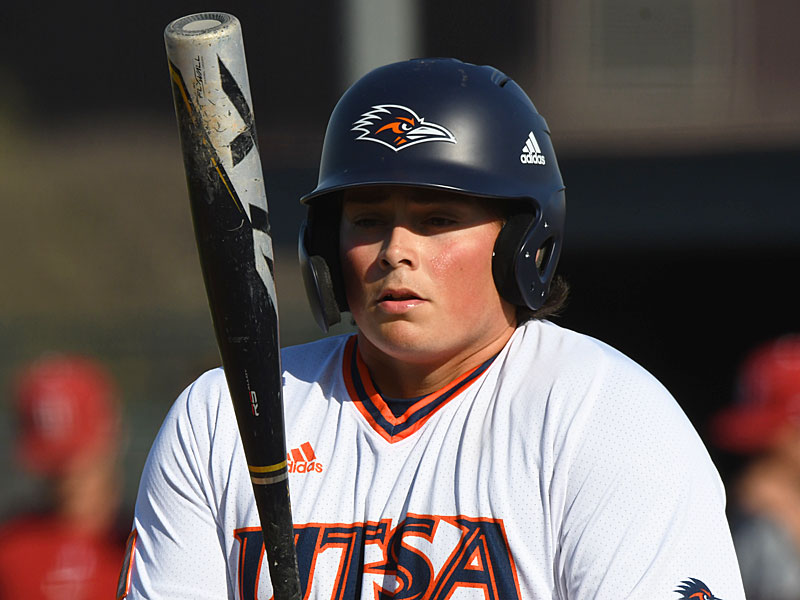 UTSA’s Ryan Flores homered in the ninth inning for the winning run against Southern Miss in the Conference USA tournament on Friday, May 27, 2022. – file photo

Expectations around UTSA were that the Roadrunners needed two wins in the Conference USA baseball tournament to be in strong position to earn an NCAA tournament at-large bid.

The ultimate outcome from UTSA’s standpoint would be to win the CUSA tournament and the automatic bid that comes with it.

The Roadrunners (37-19) advanced to Saturday’s 12:30 p.m. CUSA tournament quarterfinals with a chance to advance to Sunday’s championship. They will face Southern Miss one more time.

A back-and-forth game came down to a solo home run by UTSA’s Ryan Flores in the top of the ninth. That broke a 6-6 tie. It was his third home run against Southern Miss this season – all on the Golden Eagles’ home field.

“Clearly he likes to hit here,” UTSA coach Pat Hallmark said in a postgame interview on ESPN+. “We played here two weeks ago. He hit the ball well here and they’ve got the best pitching staff in the league and one of the best staffs in the country. Flo just likes hitting here I guess so I hope he stays hot.”

Simon Miller (4-3) pitched the final 2 2/3 innings for UTSA to earn the win. He allowed one run on two hits.

The Roadrunners scored one or two runs in each of the last four innings in a game that stayed close the whole way.

Matt King and Jonathan Tapia hit back-to-back doubles in the top of the eighth – King scoring on Tapia’s hit to put UTSA in front 6-5. Southern Miss scored in the bottom of the inning to even it at 6-6.

“I’m a little flustered,” Hallmark said. “We didn’t play great. We made some mistakes. I think we played really hard.

“They’re (Southern Miss) tough. They’re playing at home. They got the crowd. Then we turned it back around.”

UTSA scored twice in the seventh. The Roadrunners took advantage of a two-run error. That set up a run by Leyton Barry from third on a ground ball and a run by Shane Sirdashney on a Josh Killeen hit.

The Roadrunners got a run in the sixth when Garrett Poston doubled in Chase Keng.

UTSA got on the board first with two runs in the top of the third. King scored from third on a fielder’s choice and Killeen singled in Barry.

UTSA has played Southern Miss four times in 2022 – all on the Golden Eagles’ home field in Hattiesburg. Flores had hits in all four games including home runs in three of four:

UTSA awaits the winner of Friday’s 5 p.m. elimination game. As of now, that could set up yet another meeting with Southern Miss, which faces Florida Atlantic.

UTSA had 12 hits including two each from Tapia, Barry, Flores, Killeen and King. The Roadrunners recorded three doubles. 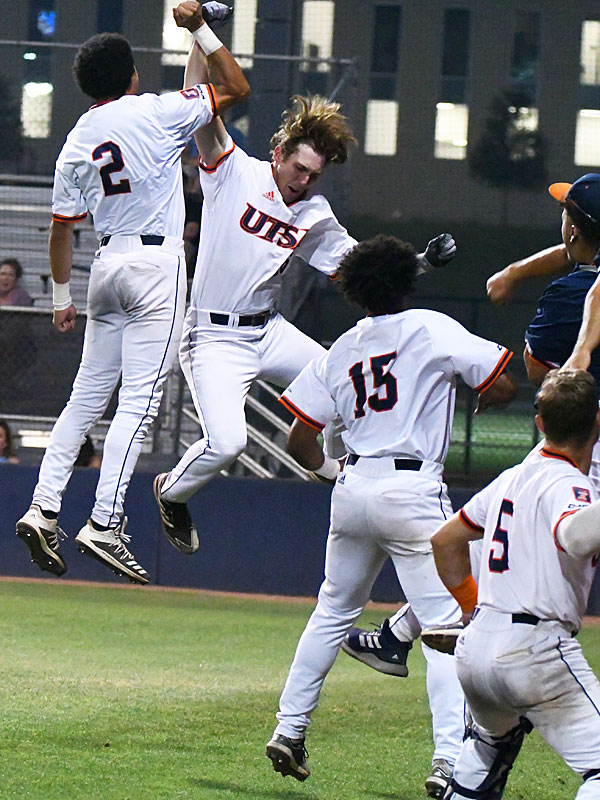 Struggling on offense in the middle innings, UTSA exploded for five runs in the bottom of the eighth Friday night and emerged with a 7-2 victory over the UAB Blazers at Roadrunner Field.

Coming out of the bullpen, Luke Malone shut down UAB on no runs and two hits in the final 2 and 1/3 innings to earn the victory. 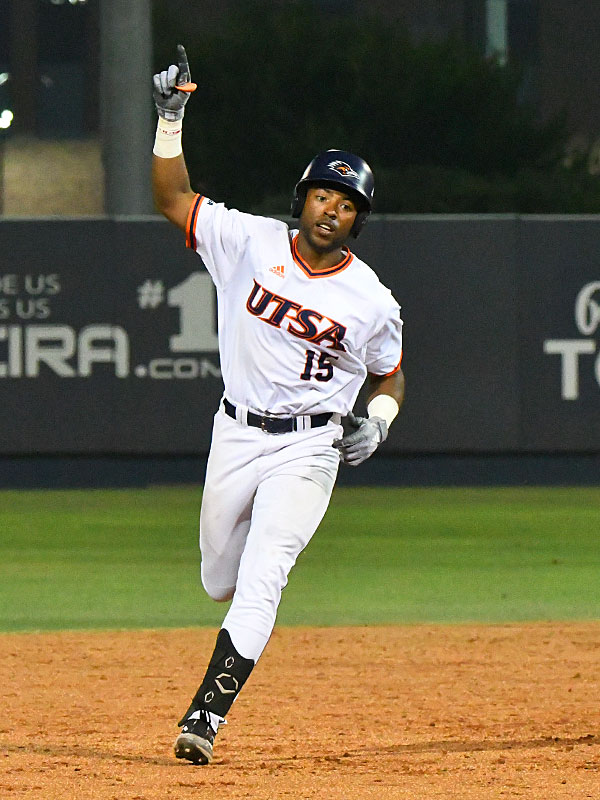 UTSA’s Ian Bailey, a senior graduate student from Stevens High School, rounds the bases after hitting his team-high 13th home run of the season in the eighth inning. – Photo by Joe Alexander

Solo home runs from Shane Sirdashney in the first inning and Jonathan Tapia in the third propelled UTSA into an early 2-2 tie.

The five home runs for the Roadrunners tied a team season high established only one other time — on March 6 — in a 15-7 victory at home over the Southern Jaguars.

UTSA and UAB, with one win apiece, will play the finale of their C-USA weekend series at 11:30 a.m. Saturday.

UTSA has been playing a C-USA schedule since the spring of 2014. Previously, the UTSA school record for C-USA single-season wins came in 2015 when the Roadrunners went 17-13.

This year’s Roadrunners had their first chance to get No. 18 in the series opener on Thursday night, but the Blazers denied them, putting together two big innings for an 18-7 victory.

On Friday night, the Roadrunners scored a run in the bottom of the third on a Tapia homer to tie the game 2-2. But from there, the bats went cold.

Blazers pitching held the Roadrunners hitless in the fourth, fifth and sixth innings. In the seventh, Bailey led off with a double, and UTSA went on to put runners at second and third with one out. But the Roadrunners failed to score.

UTSA finally broke through in the eighth. Shane Sirdashney led off with a single to left. Ryan Flores legged out a bunt single, putting men at first and second. With Josh Killeen at the plate, both moved up on a wild pitch.

Killeen broke the tie with a fielder’s choice ground ball that brought Sirdashney in from third for a 3-2 UTSA lead.

At that point, the Roadrunners’ power game materialized with back-to-back homers. Chase Keng launched a two-run homer to right center and Bailey smoked a solo shot to left. One out later, Darcy connected on a solo shot to left for the 7-2 lead.

For Darcy, it was his second home run of the year. He hit the first one in the season opener on Feb. 18 at Tarleton State. Bailey has 13 homers on the season, while Keng has seven, Tapia six and Sirdashney five.

The UTSA Roadrunners cranked out four home runs to back the pitching of sophomore Daniel Garza Friday night, rolling to an early five-run lead en route to a 13-2 Conference USA victory over the Middle Tennessee State Blue Raiders.

Garza (2-0) was masterful, throwing a career-high 85 pitches, while working into the sixth inning. In all, he pitched 5 and 2/3 innings and gave up one run on five hits. Garza walked one and struck out seven.

With the victory, the Roadrunners won for the 16th time in their last 19 games and moved into sole possession of second place in the conference standings, three games behind the fourth-ranked Southern Miss Golden Eagles.

The Blue Raiders entered the game on a hot streak, having won two of three last week at Louisiana Tech to claim their fifth straight series victory in the conference. But while Garza was shutting down the home team early, Leyton Barry hit a solo home run in the third inning.

Flores hit a solo of his own in the fourth, and Barry followed later with a three-run shot, boosting UTSA into a 5-0 lead against Middle Tennessee starter Zach Keenan.

Ian Bailey, Chase Keng and Isaiah Walker combined for 10 hits between them on Sunday afternoon as the UTSA Roadrunners downed the Old Dominion Monarchs, 13-4, and clinched a Conference USA weekend series on the road.

After losing the opener 11-0 on Friday, things didn’t look too promising for the Roadrunners. But they rallied to win 8-7 in 11 innings on Saturday and then pounded out 16 hits to cruise in the series finale.

As a result, the Roadrunners have moved into a tie for third place in the C-USA. Behind league-leading Southern Miss and Louisiana Tech, UTSA (21-11, 7-5) is tied with the UAB Blazers and the Florida Atlantic Owls.

Bailey, a senior from San Antonio’s Stevens High School, went four for five with a triple, a double and two singles. He also scored four runs and drove in three. Keng enjoyed a three for five day with four RBIs. Walker, a UTSA freshman from Manvel, also went three for five. He drove in a run and scored once. Braden Davis pitched six innings for the victory. He exited with a 6-4 lead, giving way to relievers Grant Miller and Braylon Owens, who finished the game. Davis and Owens are freshmen.