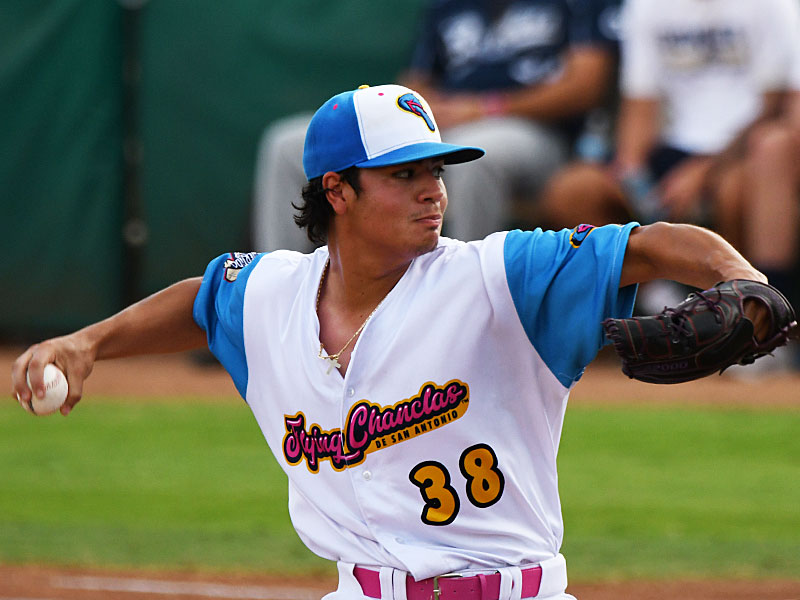 With the win, the Chanclas avenged a 6-1 loss to the Bombers in the series opener Tuesday and moved back into first place in the South Division standings of the Texas Collegiate League.

The Chanclas (12-7) and the Bombers (12-8) will play again Thursday night at Wolff, before the teams move on to play three more starting Friday at Travis Field in Bryan.

Perez, from Laredo Alexander and TCU, was sharp from the beginning.

He kept throwing strikes to challenge the visitors, and the visitors kept making outs. Through the first three innings, Perez had a strike-ball ratio of 32-13. His teammates responded in the bottom half with three runs to take a 3-0 lead.

For his night’s work, Perez pitched four scoreless innings and allowed only three hits. He walked three but he also struck out five.

The Chanclas made up for a poor showing in Tuesday’s series opener by blowing away the Bombers in the middle innings.

After scoring three runs in the third, the Chanclas added one in the fourth, five in the fifth and one in the sixth for a 10-0 lead. Smith, from the University of the Incarnate Word, sparked the uprising in the fifth with a two-run single. 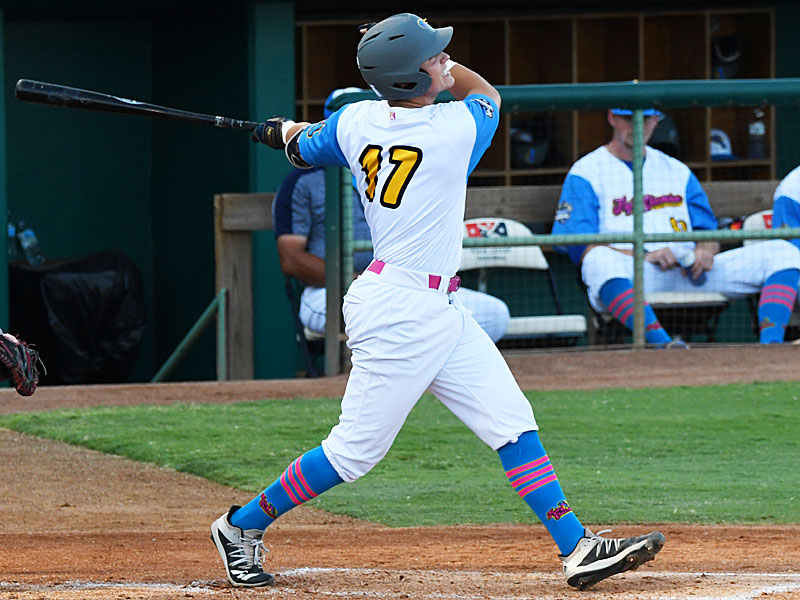 Grant Smith had his second three-hit game in the last four outings. He also drove in three runs and scored three. -Photo by Joe Alexander

The Bombers hastened their own demise with wildness and walks. They issued nine bases on balls for the game. 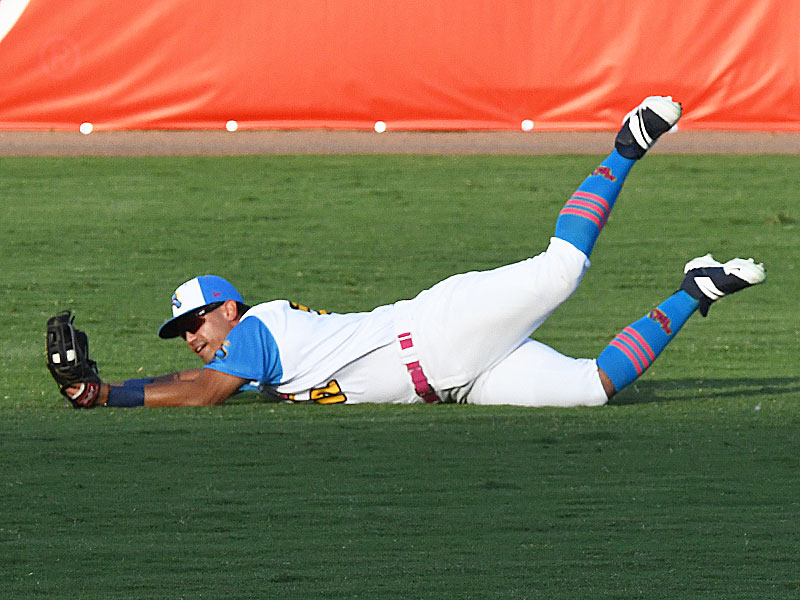 Flying Chanclas left fielder Anthony Forte makes a diving catch on a fly ball that was knocked down by a strong breeze on Wednesday against the Brazos Valley Bombers at Wolff Stadium. – photo by Joe Alexander 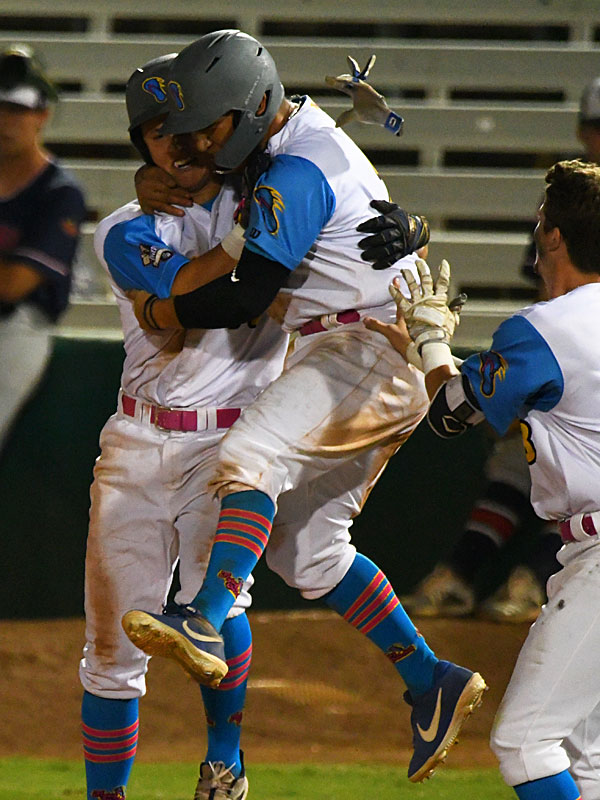 Grant Smith (left) and Johnny Hernandez celebrate after Smith’s infield single drove in the game-winning run in the bottom of the 11th inning. – Photo by Joe Alexander

On Saturday night, he produced three hits and three RBI, including a game-deciding, run-scoring infield single in the bottom of the 11th, as the Chanclas rallied past the Generals, 7-6, at Wolff Stadium. 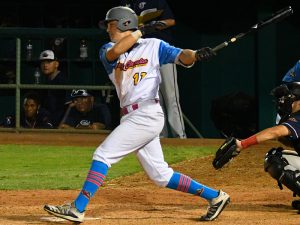 Grant Smith ends it with a walk-off hit in the 11th inning against Victoria. Smith, from the University of the Incarnate Word, had three hits and three RBI. – Photo by Joe Alexander

It was the third straight extra-innings game between the Chanclas and the Generals in the last three nights. The Generals had won the last two, and they had a chance to make it three straight when scored four runs in the top of the third inning for a 5-1 lead.

After the Chanclas rallied to tie it 5-5 after the regulation nine innings, the Generals broke through with a run in the top of the 11th to make it 6-5.

In the bottom half, the Chanclas, by rule, started with a runner at second base. All teams in the Texas Collegiate League start extra innings with a runner on second, mirroring a rule installed in minor league baseball a few years ago.

The Chanclas had been unsuccessful in capitalizing on the opportunity the past few nights. But, they finally broke through in the bottom of the 11th against the Generals. With Ryan Flores opening at second base, he came around to score to tie it 6-6 when Tyler LaRue led off with an RBI single.

After the Chanclas loaded the bases, Smith stepped up to face Victoria left-hander Dylan Turner.

Smith hit a sharp grounder up the middle. The ball was knocked down by Generals shortstop Jonathan Tapia. But Tapia couldn’t control it to make a force play at second, allowing Kyte McDonald to race home from third with the winning run.

With the victory, the Chanclas improved to 3-2 in a hotly-contested series against the Generals. In Victoria, the Chanclas won the first two and lost the finale. In San Antonio, they dropped the opener at home, before they pulled out the second game in dramatic fashion.

The series finale is Sunday night at Wolff.

The Generals won 8-7 in 11 innings on Thursday night at Riverside Stadium in Victoria. As the series shifted to San Antonio on Friday, the Generals won again, claiming a 4-3 victory in 10 innings.

Please click on the link for Saturday’s official box score.

The Brazos Valley Bombers (9-5) and the Chanclas (10-6) are in a virtual tie for first in the TCL South division, with the Bombers holding an edge by percentage points. After a league-wide day off on Monday, the Bombers and Chanclas will open a three-game series Tuesday night at Wolff Stadium. 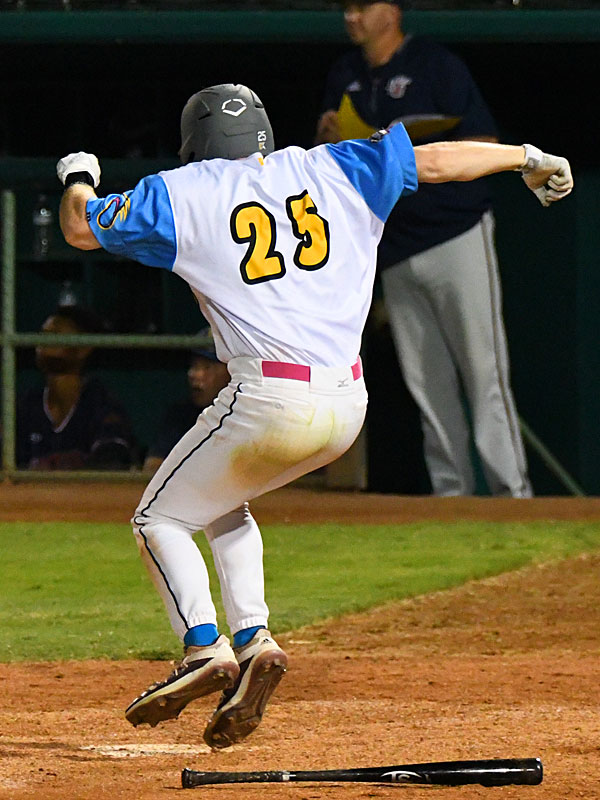 Kyte McDonald jumps on home plate to score the winning run in the bottom of the 11th inning in the Flying Chanclas’ 7-6 victory over the Victoria Generals on Saturday at Wolff Stadium. – photo by Joe Alexander