Guard Jalon Gates returned to the area where he played his high school basketball, and he put on a show for his family and friends.

The former Clemens standout scored 18 points — all in the second half — leading the Houston Baptist Huskies to a come-from-behind, 96-92 victory over the Incarnate Word Cardinals.

With about 20 people cheering him on in an HBU road game at the UIW McDermott Center, the son of “Hoop Dreams” Chicago playground legend Will Gates, Sr., hit 6 of 7 shots from the field and 5 of 7 free throws.

“I’ve actually struggled in the past playing here,” Jalon Gates said. “So to get a win here, to get us off to a winning streak, it’s a blessing.”

Houston Baptist guard Ian DuBose drives for a bucket and gets fouled in the first half at Incarnate Word. Fast-paced game tonight at the McDermott Center. Tied, 40-all. 2:12 left. https://t.co/hyCDEtJ4sq pic.twitter.com/QZmcfKuOOX

Incarnate Word guard Augustine Ene drives hard to the hoop in the first half against Houston Baptist. https://t.co/hyCDEtJ4sq pic.twitter.com/9BhBOn2hAO

Both Houston Baptist and Incarnate Word entered the game with losing records and long dry spells. HBU had lost six straight. UIW had lost five in a row. As a result, both played with a passion, trying to break out of their respective funks. It was a hotly-contested game, with 15 ties and 20 lead changes.

UIW forward Christian Peevy takes a pass and slams it home in the last minute of the first half. UIW leads Houston Baptist 45-44 at intermission. https://t.co/hyCDEtJ4sq pic.twitter.com/6F7DHso3kh

After giving up a couple of easy buckets to start the second half, the Cardinals put together their best run, a 12-0 streak. Jordan Caruso’s jumper with 15:54 remaining capped it and lifted the Cardinals into a 57-48 lead, their largest of the game.

Getting a few stops

Clearly, offense ruled the night. UIW hit 30 of 53 from the floor (for 56.6 percent) and HBU connected on 37 of 66 (for 56.1). But the Huskies clamped down a little better in the second half, which started to turn the tide. In the meantime, the visitors kept shooting with a hot hand, knocking down 20 of 29 (for 69 percent) after intermission.

HBU guard Braxton Bonds snares a rebound and one-hands a pass to Jalon Gates, who dunks for a six-point Huskies lead with 11 seconds left.

With 2:24 remaining, UIW forward Christian Peevy hit a couple of free throws to tie the game, 88-88.

From there, Houston Baptist made most of the plays to win the game. Gates was big, scoring his team’s last eight points, including a break-away dunk with 11 seconds remaining that made it 95-89.

“We got a bunch of young bucks, and we got to do a better job of executing down the stretch,” UIW coach Carson Cunningham said. “I give Houston Baptist credit. They were able to make the plays late.”

For the third straight game, UIW played without guard Morgan Taylor. The freshman from Chicago has a broken hand, a spokesman said. Cunningham said he’s uncertain when the team’s leader in minutes played per game, and also its second leading scorer, can return. 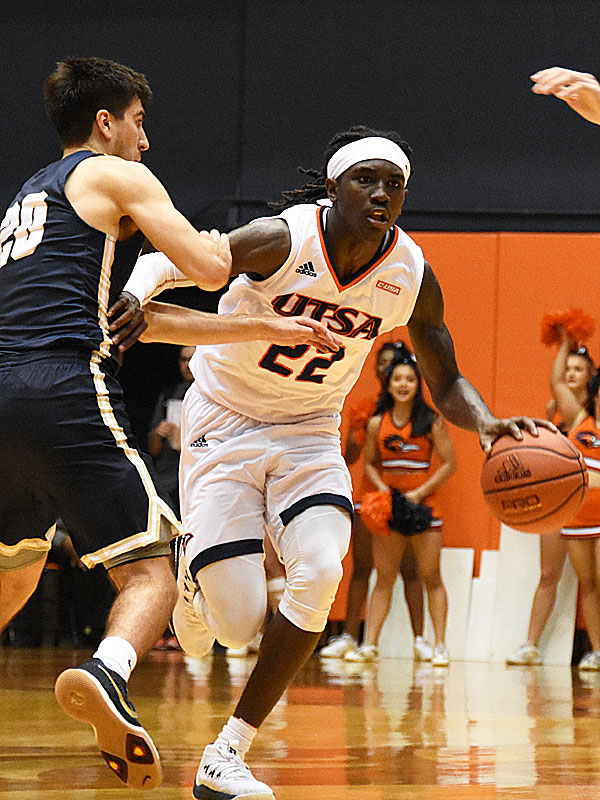 Keaton Wallace drives on a defender in a Nov. 8 home game against St. Edward’s.

Frohnen, a junior from Las Vegas, hit 10 of 12 shots from the floor, scored his career high and led the Roadrunners to their second straight victory.

The game was played in Houston at Sharp Gym. Houston Baptist came in with confidence, having knocked off Wake Forest, 93-91, on the road last weekend.

Benjamin Uloko had 14 points on 6 of 9 shooting off the bench, and 6-10 center Edward Hardt scored 13 for HBU.

In a game that went back and forth all night, the Huskies led by six with six minutes left but couldn’t hold on against the Roadrunners, who scored a dozen points in a row to take charge.

UTSA hit its season-high in scoring, while shooting 46.8 percent from the field. Frohnen scored 13 in the first half. Jackson, in his fourth game back since returning from a knee injury, was limited to 20 minutes. He scored 15 points in the second half. Jackson has scored 21 in back-to-back games. Wallace hit four three-pointers, giving him eight in his last two.

“A lot of these teams have to focus on these great shooters in Keaton and Jhivvan. That just opens up some lanes for me, and I took advantage of it tonight.” — Frohnen told the team’s radio broadcast on KTKR.

Houston Baptist appeared to be on the verge of winning when Oliver Lynch-Daniels drove for a layup and a 72-66 lead for the Huskies with 5:45 left.

Not to be denied, the Roadrunners surged 12-0 over the next two minutes, with Jackson scoring the first eight in the run.

UTSA point guard Giovanni De Nicolao capped the streak when he sank a free throw for a 78-72 lead with 3:03 remaining.

At the end, DuBose drilled a three-pointer to pull the Huskies within two with 8 seconds left.

But Jackson was fouled on the inbounds, and he hit two free throws to account for the final points. 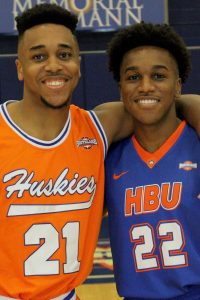