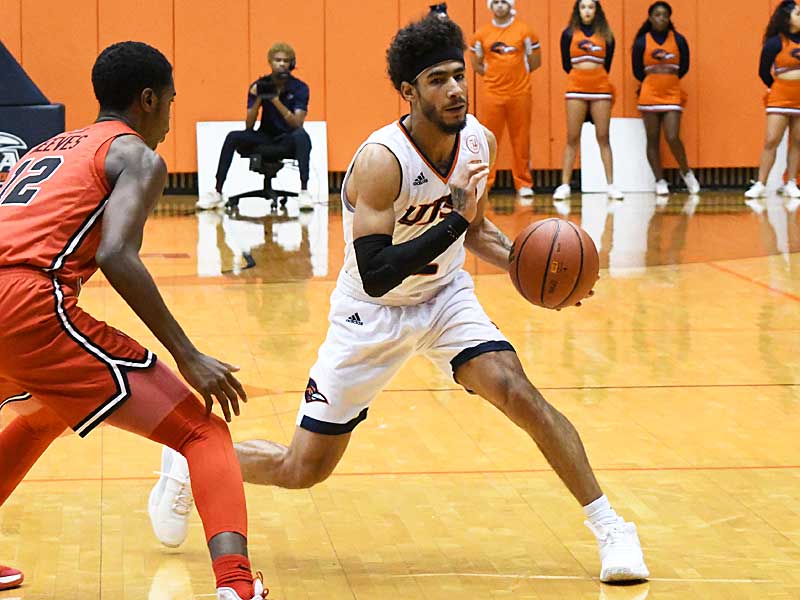 UTSA guard Jhivvan Jackson scored 25 of his season-high 41 points in the first half. With the performance, he boosted his NCAA leading average to 26.8 per game. – photo by Joe Alexander

Clearly loving the moment, UTSA guard Jhivvan Jackson delivered almost as many post-game hugs to the fans as he did jaw-dropping offensive moves Saturday afternoon.

The impromptu show of affection from both player and fans broke out shortly after Jackson dropped a season-high 41 points on the Illinois State Redbirds in an 89-70 victory for the Roadrunners.

On a historic note, it was the seventh-most points in a game by a UTSA player in program history.

“We all excited to get this dub before we head out to the Christmas break,” Jackson said. “I think our defense was the main key, cause we been emphasizing that for so long, these past two weeks. We just came in to practices, and that’s all we worked on.

“We came out in the first half, played defense. I got a little hot. But, other than that, it was all because of our stops.”

Averaging 25.5 points coming into the game, Jackson nearly matched it in the first half with one of the best sequences of his career.

Jackson, the NCAA’s scoring leader, exploded for 25 before intermission.

At one point, he hit six shots in a row, including one from the middle of the court about 30 feet from the hoop.

In response, two fans seated near the end line on one side of the floor jumped up and screamed.

One of them stomped her feet and pumped two clenched fists.

“Honestly I try to take most of the shots that I practice,” said Jackson, who finished with five threes. “I think I got a couple of good looks in the first half. They went in. Coach started running a couple of plays for me. My teammates found me and they just trusted me to make shots.”

Jackson’s finished five points shy of his career high of 46 from last season at Western Kentucky. Roderic Hall holds the school record of 52 in a game played at home against Maine in December 1997.

Afterward, a reporter asked UTSA coach Steve Henson if the Roadrunners just get out of the way when Jackson gets as hot as he did against the Redbirds.

“Yea, kinda,” Henson said. “We did. You know, he’s always had the ability, and a lot of his big games are just the result of him making special plays.

“(At) Texas State he had 20 in the first half, and that wasn’t because of the plays we were calling, necessarily, although I think we’re using him a little better than we ever have at any point in his career. Getting him moving into space better.

“But, yeah, he was just hot, doing special things out there.”

Stepping up on defense

The Roadrunners entered play on Saturday with questions mounting on how they can possibly contend for a Conference USA championship with a defense that has a tendency to get burned.

For the season, the Roadrunners were giving up 46.4 percent shooting from the field, which ranked 317th out of 350 teams in the nation.

On Wednesday night in Houston, they yielded 55.8 percent and 59.1 percent in the second half in an 88-78 loss to Oregon State.

In a turnaround of sorts, UTSA held Illinois State to 33 percent in the first 17 minutes of the game, and 40.3 percent for the game.

Getting a boost from Byron

The Roadrunners also came into the Illinois State game working on boosting the play of senior forward Byron Frohnen.

Frohnen responded with his season-high of 10 points on 5 of 9 shooting. He also contributed six rebounds and two assists.

With the victory, UTSA showed that it can play well against mid-major competition and that it might even be capable of postseason success if it can continue to improve defensively.

At the very least, they played well enough to dream. Henson said it’s important that the Roadrunners are healthy, generally.

“Our confidence is pretty high,” he said. “The record’s not what we would have wanted it to be. It’s not the kind of start that we wanted. But, again, we want to use this game as a spring-board … to continue to make progress defensively.

“I think we’re in a position — because of our chemistry, because of our mindset right now, and just being healthy — that we can still do something special.”

Illinois State — The Redbirds of the Missouri Valley Conference fell to 0-3 on the road and to 2-3 in December. Forward Keith Fisher III led the Redbirds with 20 points on 7 of 9 shooting. Zach Copeland scored 16 and Antonio Reeves came off the bench for 12.

UTSA — Keaton Wallace had an off night with 1 of 7 shooting, but Henson shrugged it off as “one of those nights.” Wallace, UTSA’s second-leading scorer, had only five points but he also contributed six rebounds, two assists and a block.

Winners of four of their last five and five out of seven games, the Roadrunners take a break for Christmas and then return to play at home on Dec. 28 against the San Antonio-based Our Lady of the Lake University Saints, an NAIA program.

The Roadrunners open the C-USA portion of the schedule with a trip to Florida, including games on Jan. 2 at Florida Atlantic and Jan. 4 at Florida International.

Jhivvan Jackson swishes a long three late in the first half against Illinois State. Jackson has 25 points, and UTSA leads 44-24 with 4:34 remaining. https://t.co/hyCDEtJ4sq pic.twitter.com/H1LlwlC5MQ 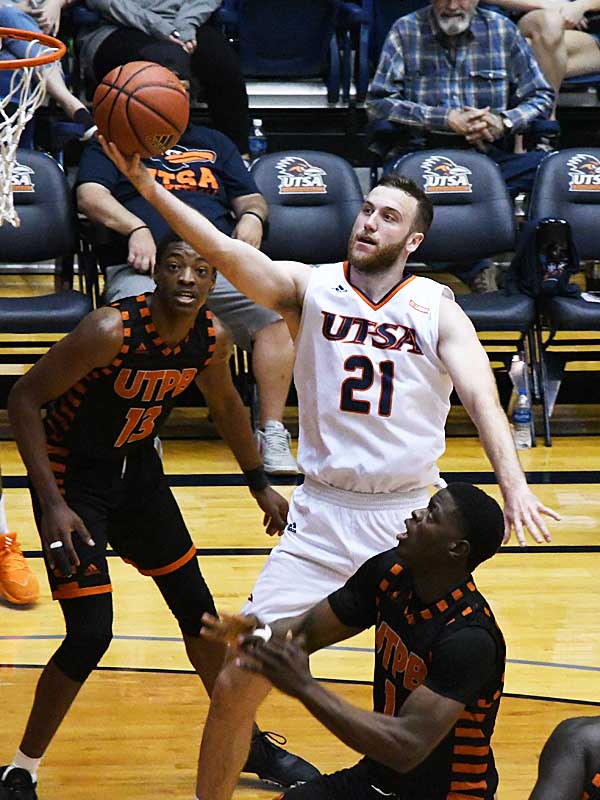