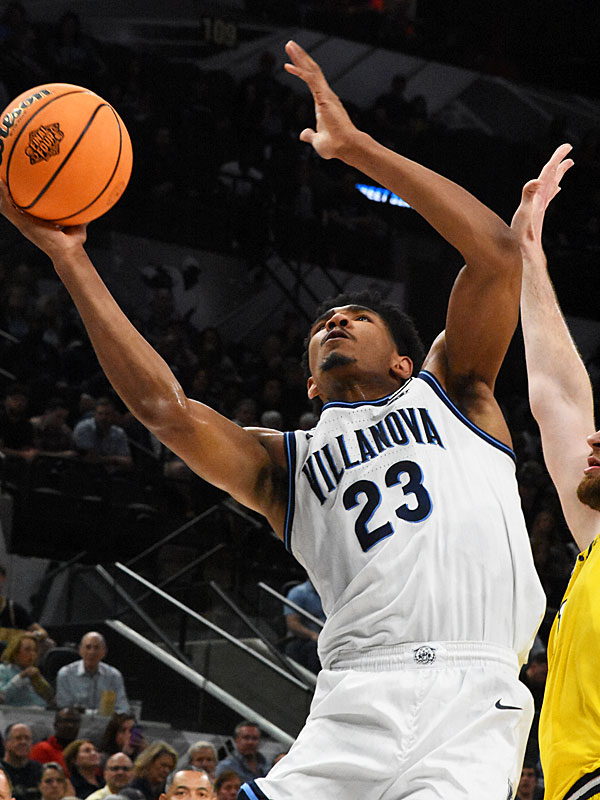 Senior Jermaine Samuels produced 22 points on 8 of 13 shooting to help the No. 2-seeded Villanova Wildcats beat the 11th-seeded Michigan Wolverines in the NCAA Sweet 16. – photo by Joe Alexander

Justin Moore had 15 points and Collin Gillespie 12 for the Wildcats, who took 30 three-point shots and made nine of them. 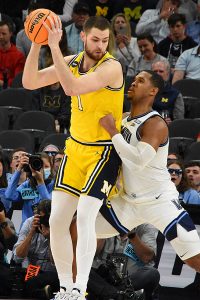 Hunter Dickinson of the Michigan Wolverines (left) battles against Villanova’s Eric Dixon. Dickinson had 15 points and 15 rebounds but was limited to 6 of 16 shooting by Jermaine Samuels, Dixon and others. – Photo by Joe Alexander

Hunter Dickinson led the Wolverines with 15 points and 15 rebounds. Eli Brooks scored 12. Michigan trailed by only three at the half but couldn’t get the offense going in the last 20 minutes.

Villanova held Michigan to 26.5 percent shooting in the second half.

With the victory, the Wildcats, seeded second in the NCAA South region, will move into the Elite Eight round. They will play Saturday against the Houston Cougars. Houston upset No. 1 seed Arizona 72-60 later Thursday night.

For the 11th-seeded Wolverines, the season is over. Michigan had high hopes last fall but couldn’t sustain the success once the season went into late February. The Wolverines (19-15) were 6-6 in their last dozen games, counting the postseason.

Meanwhile, the Wildcats (29-7) are rolling. Coach Jay Wright’s team has won eight in a row. In its last 14 games, Villanova is 13-1. Samuels was the man in the first game of Thursday’s doubleheader, helping to hold the 7-foot-1, 260-pound Dickinson to 6 of 16 shooting.

“I wanted to stay mobile,” Samuelson said. “I understand my teammates are right behind me. They’re going to make plays for me. That gave me all the confidence in the world. He’s a phenomenal player. He’s going to get great looks at the basket.

“Knowing I had my teammates behind me, that gave me all the confidence I needed.”

Villanova’s Caleb Daniels supplied some energy and toughness in the second half, when he went off for eight points and four rebounds.

Asked what got him going, Daniels said he knows his teammates will find him on the perimeter if he is open. He also claimed that he wanted to be on the attack, to make things happen. 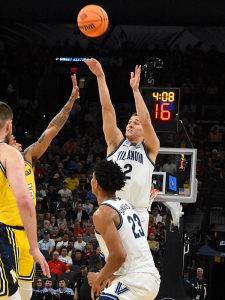 Senior Collin Gillespie led Villanova with four 3-pointers. He was 4 of 14 from the field and scored 12 points. – Photo by Joe Alexander

The first 20 minutes were not pretty. The Michigan Wolverines shot 44.4 percent.
The Villanova Wildcats? They were good on 37.9 percent.

Michigan blocked four shots. Villanova made four steals. It was just one of those halves.

Villanova had an edge, though. Faced with a zone defense, the Wildcats fired up 16 three-point attempts and made five of them, taking a 31-28 lead over Michigan.

Samuels finished the half with 11 for Villanova, followed by Moore with 10 and Gillespie nine.

He led the Wolverines offensively with four of seven shooting. DeVante’ Jones led a late surge for Michigan. He had seven at the half.

Michigan jumped out to an early lead but Villanova for the most part controlled the action. The Wildcats’ biggest lead was seven at 18-11 with 10 minutes left.

Good afternoon, all. I just sat down at press row at the AT&T Center. Time to rap out a few notes on the Sweet 16.

Michigan (19-14) hopes to win and advance to the Elite Eight for the 15th time (16 if you include the 1993 game, which was vacated because of NCAA infractions).

The Wolverines have advanced to the Elite Eight round recently in 2018, when the John Beilein-coached team swept into the Final Four and lost the NCAA title game to Villanova, and last year under coach Juwan Howard. Last year, the UCLA Bruins beat the Wolverines by two in the R8 to deny Howard his first trip to the Final Four as a head coach.

If Michigan wins, it would be the second year in a row that an 11 seed has reached the Elite Eight but only the ninth time since 1985. Since ’85, only five 11 seeds have made it all the way to the Final Four.

The Wolverines started the season with high hopes but fell into a funk during Big Ten competition, going 4-4 leading into the postseason. After losing to Indiana in the first game of the conference tournament, Michigan entered NCAAs as a No. 11 seed and defeated six seed Colorado State (75-63) and three seed Tennessee (76-68).

In the second game of the night, it’s Houston vs. Arizona.

Houston (31-5) is hunting its 14th trip to the Elite Eight. The Cougars made the R8 last season on the way to its first Final Four trip in 37 years. The Quentin Grimes-led Cougars lost in the national semifinals to the Baylor Bears, who went on to claim the NCAA championship. It was Houston’s first Final Four since the 1983-’84 days of Hakeem Olajuwon, Clyde Drexler and Phi Slama Jama.

Despite losing two star players around the first of the calendar year, the Cougars are hot coming into the Sweet 16. They have won five straight. In their last 12 games, they are 11-1. Houston won the AAC tournament in Fort Worth with victories over Cincinnati, Tulane and Memphis. Moving into the NCAA tournament, the Cougars drew a No. 5 seed and set out for Pittsburgh, where they downed the UAB Blazers, 68-53, and then knocked off four seed Illinois, 68-53.

Houston guard Taze Moore listens to some music before he takes the floor for practice Wednesday in San Antonio. https://t.co/hyCDEtJ4sq pic.twitter.com/NnRSSZrJVy

The Houston Cougars just arrived for a Wednesday morning/afternoon workout at the AT&T Center. Fifth-seeded Houston will take on No. 1 seed Arizona in the Sweet 16 of the NCAA tournament Thursday.

Houston is one of the top defensive teams in the nation. The Cougars lead the nation in field goal percentage (37.5) defense and rank fourth in points allowed (59 per game). They’re 12th nationally in rebound margin per game (seven).

The Michigan Wolverines emerged as the first team on the floor Wednesday at the AT&T Center in San Antonio.

Michigan will take on Villanova and Houston will play Arizona on Thursday night in the Sweet 16 of the NCAA South region. The winners will play Saturday in the Elite Eight, with the survivor advancing to the Final Four in New Orleans next week.

Teams are working out and talking to the media Wednesday morning and afternoon. Please check back for updates.

Michigan coach Juwan Howard addresses his players on the eve of Thursday's Sweet 16 game against the Villanova Wildcats. https://t.co/hyCDEtJ4sq pic.twitter.com/JVVvSg7SLK