From time to time, it gets pretty wild at the UTSA Convocation Center.

If you need evidence, check out a video taken at the end of a comeback victory for the Roadrunners over the Old Dominion Monarchs (see above) from the 2018-19 season. 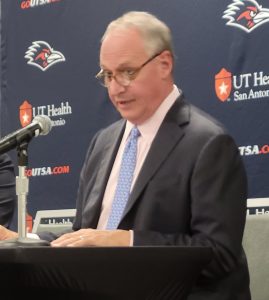 Alas, the nights of passion in the ‘Bird Cage’ may be numbered.

“That is a downstream project that we want to develop, using a public-private partnership,” Eighmy said.

The president made his comments after a campus news conference, during which he announced that UTSA would move all of its 17 NCAA Division I athletics programs to the American Athletic Conference.

The school’s move from Conference USA to the AAC is expected to be made after the next two or three years.

The arena is part of a bold facilities push for UTSA, which first fielded intercollegiate athletics teams in 1981-82.

Since then, both men’s and women’s basketball and volleyball have played their games at the Convocation Center on campus.

Over the years, officials in past UTSA administrations have talked about the need for a new arena to replace the aging ‘Bird Cage,’ but nothing of substance has been discussed until now.

The arena report came nestled in a Thursday morning AAC news release that announced UTSA as one of its six new members.

A paragraph in the release started off by saying that the school in August opened the Roadrunner Center of Excellence, a 95,000-square foot facility that houses offices and training areas and is considered as the home for the school’s 24th-ranked football program.

In addition, the AAC release said, UTSA “is embarking on an expansive” capital campaign to develop several other projects, including:

*A new 10,000-seat arena for basketball and volleyball;
*New baseball and softball stadiums;
*A dedicated basketball/volleyball training facility;
*Also, a “standalone” facility for track and field and soccer.

Estimated cost for all of the above could run into the hundreds of millions of dollars.

The administrative wheels are already moving on one of the projects.

Eighmy said UTSA has submitted a request to the City of San Antonio in an effort to gain assistance in funding the basketball/volleyball training facility.

The request is tied to the next city’s next bond project. Eighmy said it would be built adjacent to the RACE building.

“So,’ he added, “we’re already starting on systematic approaches to find resources, or mechanisms, to proceed with adding additional facilities.”

Eighmy declined to estimate what it would cost to build the basketball/volleyball competition arena or when he would like to see the teams move in.

“It’s obviously on our plans to get going,” the president said. “We have a bunch of things we have to tackle. We have to finish Park West (where the track and soccer teams compete).

“We really want to get this practice facility built, for men’s and women’s basketball and volleyball, but (the arena) is on our horizon. In my lifetime. How about that?”

UTSA men’s basketball coach Steve Henson said he’s excited about the pending move to the new conference and also about the talk of a new arena.

In regard to the challenge of playing in the revamped AAC, and competing against the likes of Memphis, Wichita State and SMU, he admitted that UTSA would be embarking on a league filled with teams that play “high level” basketball.

Memphis, under coach Penny Hardaway, has been ranked 12th nationally in the preseason Associated Press poll. Moreover, teams in the AAC play in high-caliber arenas.

Told after practice that the AAC had sent out information on UTSA’s proposed 10,000-seat arena, Henson smiled and said, “Awesome. I look forward to seeing those plans.”

Henson said he knew about the proposed training facility but acknowledged that he had not heard specifics on UTSA’s arena project.

“I know our people are working like crazy to put us in this position (to change conferences),” he said. “I assumed we had to have some other things in the works to make it happen.

Henson admitted that an arena for his program would supply a boost for a program that has posted winning records in three of the last four seasons but has yet to break through with an NCAA tournament appearance.

An arena, he said, “would do wonders.”

UTSA athletic director Lisa Campos said a combined cost for the basketball/volleyball training center and the baseball and softball stadiums could range from $70 million to $80 million.

Campos added that the arena could cost “a couple of hundred million” dollars to complete.

Clearly, it will be a tall order for UTSA to raise that kind of money.

It could take years to do it, considering the magnitude of the investment and the current economic climate locally coming out of the pandemic.

“We’re going to be strategic about how we could find revenue sources,” she said. “Of course, we’re going to capitalize on the momentum for our philanthropic endeavors, and, winning breeds winning, and folks want to be involved in that.

“Someone had asked me earlier about fundraising, and really, our fan-base, our donor-base has continued to give to UTSA athletics.”

A UTSA master plan published in 2019 pinpoints the location of the proposed arena on the west end of campus. Eighmy said he wants it to be used for “multiple” purposes.

Asked if such a building of that scope could host NCAA tournament games, Eighmy didn’t rule it out.

“Those are the things we have to consider as we develop this public-private partnership,” he said. “We’re advocating all the time why our athletics programs benefit the entire city.”

Eighmy said he wants to invest in programs led by the likes of Henson, Karen Aston (women’s basketball) and Laura Neugebauer-Groff (volleyball) who work in the Convocation Center on a daily basis.

“Our Convocation Center is not a suitable facility for either practice or intercollegiate competition,” Eighmy said. “I mean, it served its purpose in its day, but we need to move on.”