The UT-Rio Grande Valley Vaqueros came into San Antonio on Tuesday evening ranked inconspicuously at No. 139 on the NCAA baseball ratings percentage index.

But with Bryan Sturges hitting two of the visitors’ six home runs, and with J.C. Ariza pitching six scoreless innings, the Vaqueros proved to be much better than the RPI indicated, routing the No. 44 UTSA Roadrunners, 12-1.

For Sturges, it was a sweet homecoming of sorts. He played in 73 games at UTSA over two seasons from 2019 to 2020. Sturges, from Houston Seven Lakes, played at Texas A&M last season. Against the Roadrunners, he went three for four and drove in four runs.

Ariza, a 6-foot-5 righthander from Belleville, N.J., allowed only two hits. He walked one and struck out five.

Sturges hit his first homer in the fourth inning, a two-run shot, and he added a solo blast in the ninth. It was one of three Vaqueros home runs in the inning.

Coming off a Conference USA weekend road trip to Middle Tennnessee, the Roadrunners couldn’t get the bats going.

They managed only four hits on the night and avoided getting shut out when Jonathan Tapia hit an RBI double down the line in the eighth inning.

The Vaqueros exploded in the ninth for five runs on homers by Sanchez, Sturges and Lopez. The blow by Lopez off Reese Easterling was a three-run shot and accounted for the final score.

UTSA’s last two games have been something of a mystery.

Going into Sunday at Middle Tennesee, they had won 17 out of 20, a stretch in which they scored 195 runs on a .324 batting average. In losing Sunday and again on Tuesday, they have been limited to two runs while hitting just .131. 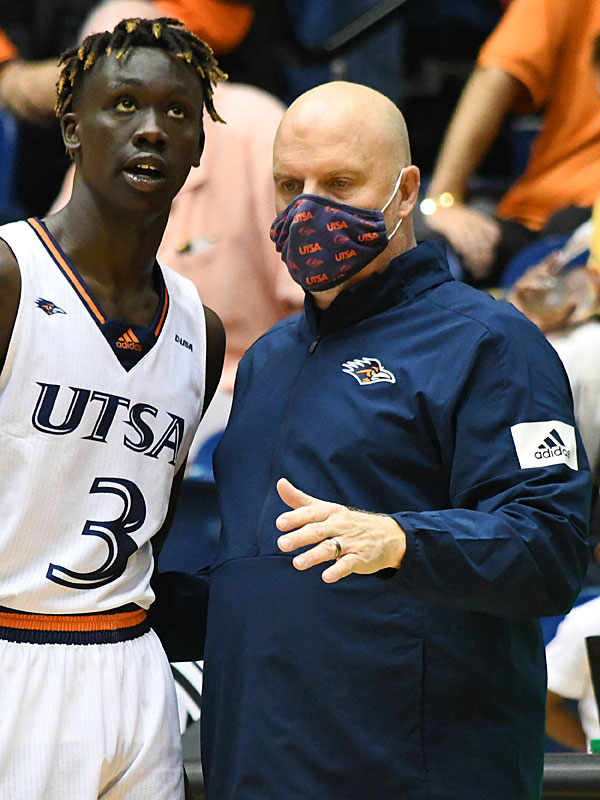 With two players sidelined in health and safety protocols, the UTSA Roadrunners experienced a horrible start and an even worse finish to a basketball game played on their home court Friday night.

Objectively speaking, though, the UT Rio Grande Valley Vaqueros had a lot to do with Roadrunners’ misery both early and late.

The Vaqueros held the home team to 3 of 17 shooting in the game’s first eight minutes, and then they hit 57 percent from the field themselves in the second half to claim a 68-50 victory at the UTSA Convocation Center.

Both Ivy-Curry and reserve forward Aleu Aleu were forced to sit out in protocols designed to prevent the spread of Covid-19.

Against slumping UTRGV, the Roadrunners failed to make up for what Ivy-Curry gives them as a scorer, as a defender and as a floor leader.

“We just missed some real, real easy (shots) early in the game, and then forced some things,” UTSA coach Steve Henson told the UTSA radio broadcast. “Didn’t get any rhythm.”

After falling behind by 13 points in the first half, the Roadrunners briefly found a spark, surging behind Jacob Germany to pull within one at intermission. 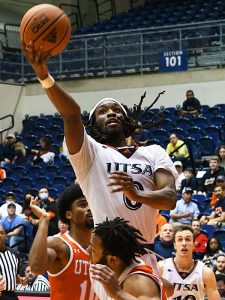 Cedrick Alley Jr. came off the bench to produce 15 points and seven rebounds. Alley played 28 minutes despite missing a few practices earlier this week with an illness. – Photo by Joe Alexander

In the second half, they played well early, forging a 34-28 lead at one point. But after that, the Roadrunners just couldn’t hang on against a team intent on breaking a five-game losing streak.

“You can be pretty good defensively, and you go 15 straight trips without putting the ball in the hole … at some point, it’s really, really going to stress your defense,” Henson said.

For the Vaqueros, the win was sweet. It was their first victory since Nov. 23 when they registered a 72-67 decision over Cal Fullerton. The Vaqueros had lost five in a row since then, falling in difficult road games at Illinois and at Texas along the way.

Coming into the game, UTSA was just starting to find a rhythm on offense. The Roadrunners had won five of seven games. In their last game, they hit 47 percent of their shots from the field in a five-point, neutral site victory over Sam Houston State.

Against UTRGV, the Roadrunners were held to a chilly 25.7 percent from the field. With the Vaqueros packing their defenders inside to stop the 6-foot-11 Germany, UTSA couldn’t capitalize, making only 2 of 21 from three-point territory.

UTSA — Center Jacob Germany had 16 points, nine rebounds and two blocks. Cedrick Alley Jr. went for 15 points, seven rebounds and three assists. Dhieu Deing, UTSA’s leading scorer, had his toughest night of the season with only seven points to break his string of 10 straight games in double figures. Deing was held to 3 of 18 shooting.

The UTSA trainer delivered the news to Henson about Ivy-Curry and Aleu late Wednesday night. On Thursday, the two players were not at practice, and Henson acknowledged their status. Henson said he wasn’t sure how long they would be out. UTSA opens Conference USA play on Dec. 30 at Middle Tennessee State. 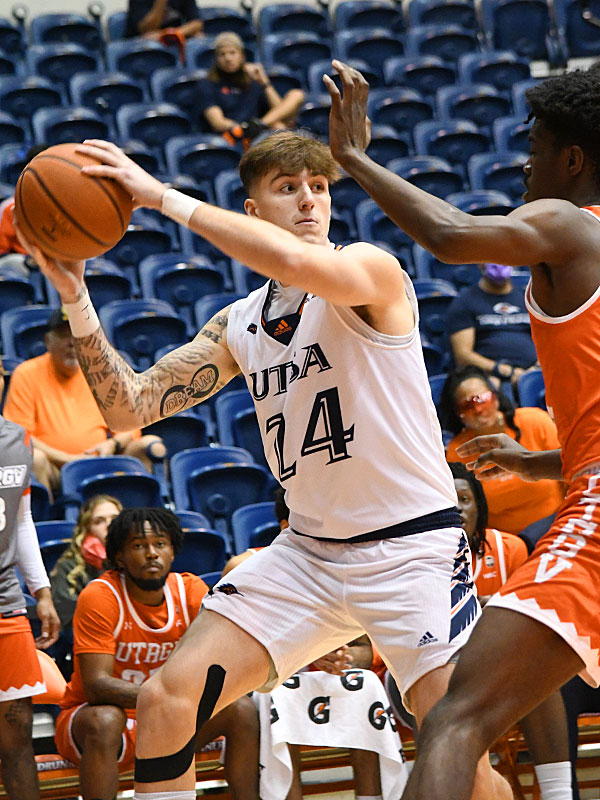 The game was played in Edinburg at the UTRGV Fieldhouse.

Rhea produced 20 points, six rebounds and two blocked shots for the Vaqueros, who bounced back from a lopsided season-opening loss at Texas. Dibiamaka scored 15 and hit three 3-pointers.

UTSA’s offense never really got untracked against the Vaqueros’ defense, which employed a mix of pressure in the backcourt, along with alternating man-to-man and zone schemes.

A day after scoring a 97-71 victory at home against Division II UT Permian Basin, the Roadrunners shot 41.7 percent and turned it over 13 times.

Freshman Jordan Ivy-Curry came off the bench to lead the Roadrunners with 12 points on 4 of 10 shooting.

Senior Jhivvan Jackson, the second-leading scorer in the nation last year, also came off the bench in his first outing this season. He added 10 points.

Last year, Jackson and Keaton Wallace were the highest-scoring backcourt in the nation, averaging more than 45 points between them. Against UTRGV, they combined for 16.

Wallace, who handled the ball for much of the afternoon, produced six points, six rebounds and four assists. He also had five turnovers.

After a shaky first half, the Roadrunners came out after intermission, trailing only by five. Pretty soon, they were tied, 34-34, when center Jacob Germany scored in the paint.

The game matched coaches Lew Hill of UTRGV against UTSA’s Steve Henson, two men who both worked together as assistants under Lon Kruger. UTRGV was pummeled 91-55 at Texas on Wednesday night. Also on Wednesday, UTSA was scheduled to open at Oklahoma and had traveled for the game, only to have it called off because of Covid-19 issues in the Sooners’ program.

In response, UTSA took an unscheduled bus ride back from Norman Wednesday night. The Roadrunners opened at home Friday afternoon, routing the Division II Falcons by 26 points, before boarding another bus bound for the Rio Grande Valley. UTSA was scheduled to bus back to San Antonio Saturday night.

“We didn’t feel like fatigue was a factor,” Henson said on the team’s radio broadcast. “We didn’t think the bus trips had anything to do with it. The bottom line is, they competed harder, and we didn’t make enough plays. We’re certainly not going to look for any of those excuses.”

“They won a lot of individual battles,” Henson said. “We couldn’t stop ’em in the post. Lot of transition opportunities for them, and then they got going, knocking down the threes.”

Added Henson: “They just kind of dictated pretty much every facet of the game. But in transition, some of their individual offense got us. We just didn’t compete hard enough on that end of the floor …

“We talked a lot about handling their press. We didn’t turn it over a lot against the press. It just took us out of our rhythm.”