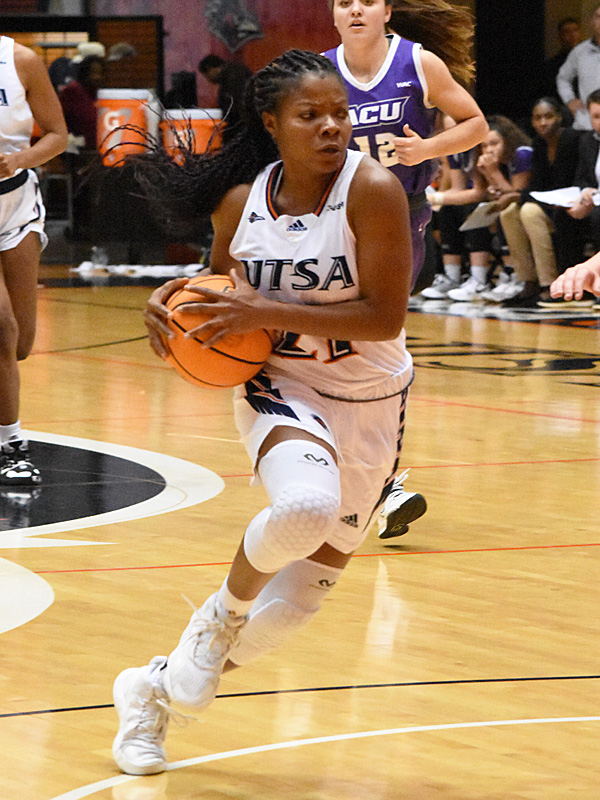 UTSA guard Deb Nwakamma hit 6 of 12 from the field and scored a career-best 16 points in her team’s home opener Sunday at the Convocation Center.- Photo by Joe Alexander

Junior guard Deb Nwakamma hit a runner in the lane and a couple of free throws in the final 35 seconds as the UTSA Roadrunners held off the Abilene Christian University Wildcats, 76-70, for their first victory of the season Sunday afternoon at the Convocation Center.

UTSA’s home opener served as an eye-opener for those who have followed the Roadrunners’ program through the years, because the team scored 70 or more points in a game for the first time since Feb. 13, 2022.

On that date last season, UTSA hit 70 for the only time all season in an 81-70 road loss to Western Kentucky.

The victory over ACU was the first time UTSA hit at least 70 in regulation in front of the home fans since Feb. 6, 2021. In that instance, the Roadrunners scored 80 in four quarters of a 107-103 triple-overtime loss to the FIU Panthers.

UTSA reached the milestone against Abilene Christian with a balanced attack. Nwakamma, a 5-foot-8 guard from Lagos, Nigeria, finished with a team-high and career-best 16 points. She also had four rebounds, three assists and two steals.

Queen Ulabo scored 11 points off the bench, while Sidney Love, Elyssa Coleman and Kyra White had 10 each for the Roadrunners, who shot 45.6 percent from the field. 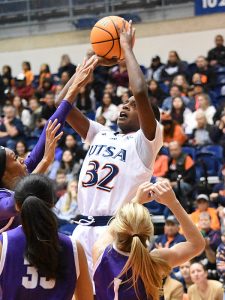 Responding to the home crowd and playing with emotion, the Roadrunners (1-2) were both fast-paced and effective for most of the afternoon on the offensive end. But the Wildcats (2-2) had their moments, as well, with ACU forward Maleeah Langstaff, a freshman, erupting for 23 points and eight rebounds.

“We’ve got to shore up our defense,” UTSA second-year coach Karen Aston said. “It’s got a lot of holes in it. But our offense is light years ahead of where we were last year.”

Last year, the Roadrunners averaged 53.9 points en route to a 7-23 record. This year, there is clearly some potential for a turnaround. In their first two games, they suffered two close road losses, falling 68-63 at Stephen F. Austin on Nov. 7, before dropping a 74-67 decision at TCU last Wednesday.

Against the Wildcats, the Roadrunners strung together a few stretches on offense that left the visitors searching for answers and the home crowd cheering. In the first quarter, for instance, they shot 52.6 percent from the field. In the third quarter, they shot 47.1 percent.

Moreover, Abilene Christian came to San Antonio with a good program, one that had reached the NCAA tournament in 2019. Last year, the Wildcats won 17 games in their first season in the Western Athletic Conference and beat the Roadrunners in Abilene by 19.

This year, the Roadrunners led most of the way and then showed some poise in the fourth quarter after the Wildcats pulled to within one. 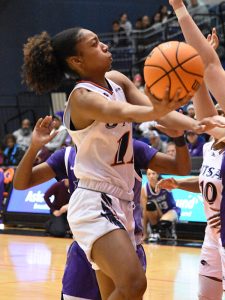 “I thought it was most definitely the most complete game we’ve played all year long,” Aston said. “You know, we’ve played really good in some stretches. But as far as being able to keep a tempo about ourselves, we weren’t able to do that in the previous two games, particularly in the second half.

“We talked about that at halftime, to try to keep the tempo going and continue to look for fast break moments.”

At crunch time, many in the announced crowd of 784 may have figured that the Roadrunners would collapse as they did so many times last season when the Wildcats surged to within 60-59 with 7:22 remaining.

In response, the Roadrunners showed some poise and answered with six straight points, including four by Love. The player of the year in the San Antonio area high schools last year, Love, from Steele High School, added a couple of free throws in the final minute.

Nwakamma was also clutch, driving right to left and then shooting a 10-footer that banked in with 35 seconds left. It was a shot that all but ended the game, putting UTSA up by five. Nwakamma added a pair of free throws with three seconds remaining to close out the game.

In the interview room later, Nwakamma said she couldn’t remember exactly what happened on her drive to the bucket, only that she was just trying “to fight to the end.” Aston joked that, “I took a deep breath, is what I did,” before praising Nwakamma’s overall performance.

“I thought she was aggressive the entire game,” Aston said. “She took open shots. Looked confident. She never looked like she was down on herself. We had a peace about us (as a team) when she was in the game, which is good.”

Another interesting element to the game centered around Jordyn Jenkins, UTSA’s leading scorer, who never quite got into the flow of the offense because of foul trouble. She hit four of 11 from the field and scored nine points — and the Roadrunners still beat a good team.

Nwakamma said it feels good for the team to have an unselfish mindset along with so many talented offensive weapons.

“We have team bonding that we’ve been working on, and it’s really working, just sharing the ball,” she said. “You got to play unselfish basketball, make extra passes to make sure everybody gets to do something. It’s not just one (player). It’s a team game.”

Even though the crowd was modest, the excitement in the arena was evident as UTSA’s offense pushed a fast pace for most of the afternoon.

In the third quarter, for instance, fans stood and made a racket after the Roadrunners forced a turnover and got the ball to Hailey Atwood. Atwood, who worked hard to overcome a nagging Achilles injury in the offseason, drove most of the length of the floor to score just ahead of an ACU defender.

The crowd stood and celebrated a nine-point lead, the largest of the game, with 2:04 left in the third quarter.

Asked about the support, Nwakamma said UTSA players noticed the energy in the building. “It gives us life,” she said. “It made us feel like we have a chance to win. Stuff like that, we really need it, a crowd like that.” 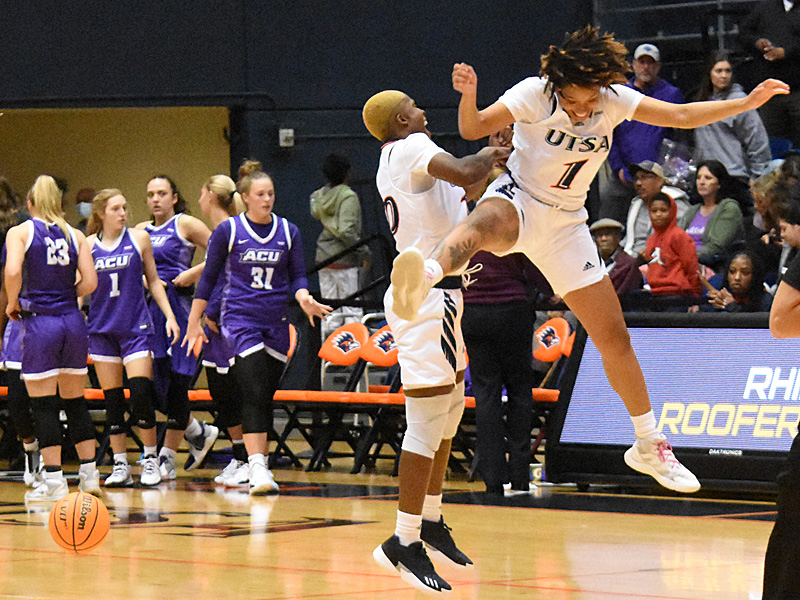 Queen Ulabo and Hailey Atwood celebrate the team’s first victory of the season as time expires. Both contributed off the bench, with Ulabo scoring 11 points and Atwood seven. – Photo by Joe Alexander

UTSA will open play in the Las Vegas Invitational on Friday afternoon against Missouri State. The Roadrunners will take on St. John’s on Saturday. They’ll return home to face Idaho on Dec. 10.

Love, from Steele, had 10 points, three assists, a rebound and a steal. Both started, with White handling the ball much of the time. Love has been utilized in the last two games, at least, as a closer at the end of quarters. Against ACU, she hit the last shot of the first quarter.

Knocking down a three

Persistence pays off for the UTSA Roadrunners, who have the ball batted away twice on one possession, before they score late in the shot clock on a Kyra White three-pointer. https://t.co/hyCDEtJ4sq pic.twitter.com/cXVYj9xcyG

UTSA's Queen Ulabo goes baseline to bank in a shot late in the first quarter against Abilene Christian. https://t.co/hyCDEtJ4sq pic.twitter.com/7krjEk2yvU

Closing out a quarter

UTSA freshman Sidney Love from Steele High School makes a move and scores on the last play of the first quarter. Roadrunners lead the ACU Wildcats, 21-16, after one period. https://t.co/hyCDEtJChY pic.twitter.com/SkNW0oo8On

UTSA sophomore Elyssa Coleman seals off a defender, receives a pass over the top and scores late in the second quarter. Roadrunners, 39-37, over the ACU Wildcats at halftime. https://t.co/hyCDEtJ4sq pic.twitter.com/i9NqP0vRlu

Hailey Atwood, pushing the pace for UTSA, scores on a breakaway late in the third quarter against Abilene Christian. https://t.co/hyCDEtJ4sq pic.twitter.com/vTpPkj5ra6

Abilene Christian gathers an offensive rebound, but UTSA freshman Maya Linton gets a deflection to force a turnover late in the fourth quarter. https://t.co/hyCDEtJ4sq pic.twitter.com/nOwh1MirGS 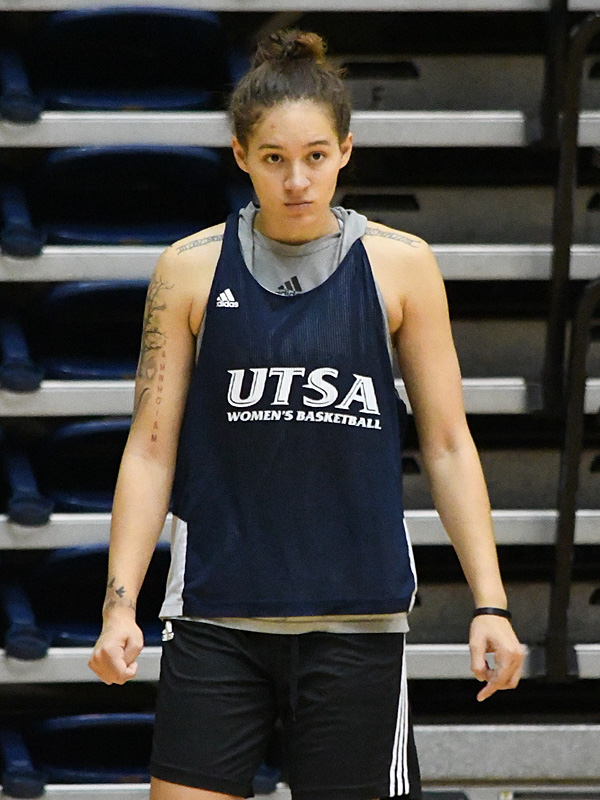 UTSA junior Kyra White is leading the team in averaging 34 minutes through the team’s first two games. White, a transfer from Southern Cal, played in high school at Judson. — Photo by Joe Alexander

Coach Karen Aston’s UTSA Roadrunners are looking for their first win of the season today. In their home opener, they’ll host the Abilene Christian University Wildcats of the Western Athletic Conference at 2 p.m. in the Convocation Center.

In the Wildcats (2-1), the Roadrunners (0-2) will look to defeat a team that won by 19 points in last season’s matchup at Abilene.

Not only is it the first home game in Aston’s second season at UTSA, it’s also the first at home for Southern Cal transfer Jordyn Jenkins, an all-Pac 12 player last season. The 6-1 junior forward is one of eight newcomers on the Roadrunners’ roster.

Additionally, former San Antonio-area athletes Kyra White, Sidney Love and Alexis Parker will get their first opportunity to play in front of the home fans.

White, also a USC transfer, is from Judson. Love (from Steele High School) and Parker (Brandeis) are two of five UTSA freshman on this year’s team.

The Roadrunners have played two games on the road and have dropped both to in-state opponents. They fell 68-63 at Stephen F. Austin on Nov. 7, and then they dropped a 74-67 decision at TCU last Wednesday.

As UTSA prepares to transition from Conference USA and into the American Athletic Conference next year, Abilene Christian is also going through changes.

Julie Goodenaugh is entering her 11th season as coach of the Wildcats. A former coach at Hardin-Simmons, she returned to Abilene in 2012, and in her first season at ACU, she guided her team to an NCAA Division II regional.

As the Wildcats moved into Division I and the Southland Conference in 2014-15, she continued to have success, leading ACU to 20-win seasons and into the Women’s NIT in two straight years, in 2016 and 2017.

In 2019, Goodenaugh’s team became the first in school history to reach the D-1 NCAA tournament. In 2019-20 season, when the Covid pandemic forced a suspension of play in the playoffs, the Wildcats finished 24-5.

Last season, the Wildcats finished 17-13 in their first year in the WAC. They defeated the Roadrunners 72-53 in Abilene.

UTSA announced that three players have signed letters of intent for the 2022-23 season:

The 11th-ranked University of Houston Cougars and the UT Arlington Mavericks on Sunday will try to join two other programs in the state of Texas as automatic qualifiers in the NCAA Men’s Basketball Tournament.

For Prairie View, it will be the school’s first NCAA appearance in 21 years. Abilene Christian has never made the Division I national tournament.

When the bracket is revealed later today, three Texas-based Big 12 squads likely will make the field.

Texas Tech and Baylor are considered locks, while TCU is probably in, as well, according to bracket projection analysts.

The Mavericks will not make the NCAA field unless they win, meaning that they have much more riding on their game today than the Cougars.

The Cougars, regular-season champions in the American Athletic Conference, are expected to make the Big Dance as an at-large entry even if they lose today.

Houston is playing in Memphis against 24th-ranked Cincinnati.

Prairie View rallied from a 13-point, first-half deficit to stun the Texas Southern Tigers, 92-86, in the Southwestern Athletic Conference title game at Birmingham, Ala. Both the Panthers and Tigers shot 55 percent in the second half. Guard Gary Blackston had 17 points and six steals for Prairie View. The Panthers secured the school’s second NCAA bid and its first since 1998.

Abilene Christian routed New Orleans 77-60 at Katy for the Southland Conference crown behind Jaren Lewis, who had 20 points, six rebounds and three steals. The Wildcats moved from NCAA Division II to Division I six years ago. Under terms of the transition, they were ineligible to play in the SLC tournament for the first four years.