Who was that masked man?

Why, it was Stanford University slugger Carter Graham, who celebrated each of his two home runs Sunday night by rounding the bases and then briefly donning a ‘Batman’ mask as he high-fived his way through teammates en route to the team dugout.

The reason for the invocation of the ‘Dark Knight’ into an NCAA tournament game against the Texas State Bobcats wasn’t entirely clear.

But as the game moved along, it became evident that the top-seeded Cardinal were not about to allow the Bobcats to play ‘The Joker’ and eliminate them from the playoffs. Not in an NCAA regional on their home field in Palo Alto, Calif.

Beaten by the second-seeded Bobcats on Saturday night, the Cardinal responded on Sunday by winning twice, once against UC Santa Barbara in the afternoon and then again against the Bobcats on Sunday night, both of them by scores of 8-4.

As a result, they ruined Texas State’s dream of a victory that would have clinched the school’s first title in a four-team NCAA baseball regional. Now, the same two teams will meet again Monday at Klein Field at Sunken Diamond in a winner-take-all for the championship.

The Bobcats raced off to a fast start, with Jose Gonzalez stroking a solo homer in the first inning for an early lead. It was Gonzalez’s third home run in the regional after hitting two in a 5-2 victory over the Cardinal on Saturday.

But Graham, not to be outdone, responded with a soaring two-run blast of his own in the bottom of the first for a 2-1 advantage. He added a three-run shot in the fourth inning, boosting the Cardinal into a 5-2 lead.

After the Bobcats scored single runs in the fifth and sixth to pull within one run, Drew Bowser hit a two-run homer in a three-run seventh, an uprising that seemed to take the starch out of the visitors from San Marcos, Texas.

Stanford’s offense was just too relentless to contain.

Not only did the Cardinal hit the ball over the fence three times, but they also sprayed line-drive singles to the outfield. They even scored on a squeeze bunt single by Adam Crampton that brought a runner in from third.

In all, the Cardinal produced 13 hits to only four for the Bobcats. Stanford pitchers Ty Uber (4-1), Brandt Pancer and Ryan Bruno combined for eight walks and seven strikeouts. Texas State starter Tony Robie (4-1) took the loss.

Robie pitched 4 and 1/3 innings and gave up five runs on eight hits. Offensively, the Bobcats were sparked by home runs from both Gonzalez and from San Antonio’s Dalton Shuffield, a senior from Johnson High School.

Texas State coach Steve Trout said: “You have to give credit to Stanford. They made some really big swings in big moments and did a good job with their arms as well. As I told the team, we are over it. This is the beauty of being in the winner’s bracket. You get to come back tomorrow and play one game to move onto the Super Regional.” 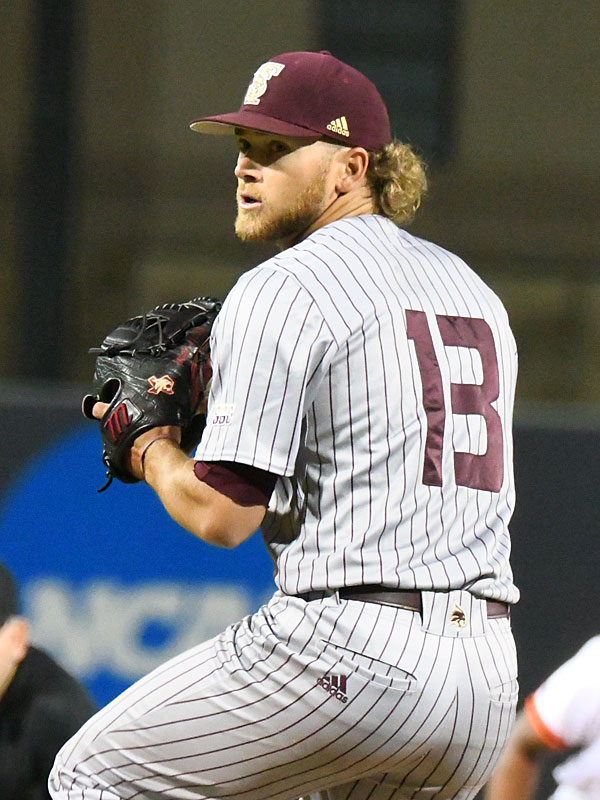 Most observers in college baseball who follow the game closely knew that Texas Tech infielder Jace Jung had the talent to lead his team into the NCAA tournament — and he did.

Jung, a third-year sophomore from MacArthur, lived up to his billing. Showing patience at the plate as one of the most feared power threats in the nation, he paced the Red Raiders in multiple offensive categories and earned all-conference honors in the Big 12.

Tech is scheduled to open the tournament Friday in the NCAA Statesboro regional in Georgia. The Red Raiders will play Notre Dame in their opener. 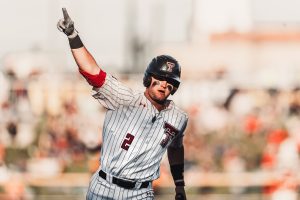 Jace Jung, a Texas Tech sophomore from San Antonio MacArthur, is regarded as one of the top prospects in college baseball leading into the 2022 draft. — Photo, courtesy of Texas Tech athletics, by Elise Bressler

More surprising than Jung’s efforts were the performances of two other players with San Antonio-area connections — Texas State’s Dalton Shuffield and Tristan Stivors.

Shuffield, a senior infielder from Johnson, and Stivors, a senior pitcher from Medina Valley, emerged as two of the best players in Texas.

With a robust .390 batting average, Shuffield was the Player of the Year in the Sun Belt Conference. Stivors led all of NCAA Division I with 17 saves.

The Bobcats’ NCAA sojourn starts Friday night at 8 p.m. when they take on the UC Santa Barbara Gauchos in the Palo Alto regional.

Jalen Battles of Arkansas (from Madison High School), Luke Boyers of TCU (Boerne Champion) and Douglas Hodo III of Texas (Boerne) were three others from the area who started on teams that will play in the national tournament.

Jalen Battles, shortstop, an Arkansas senior from Madison High School — Slashed .289/.357/.490 at the plate for the Razorbacks and once again displayed skills that showed he is one of the top defensive shortstops in the Southeastern Conference. His offensive numbers improved from his first season in Fayetteville. Last season, he slashed .269/.371/.407.

Luke Boyers, right field, a TCU sophomore from Boerne Champion — Boyers started all 56 games for the Horned Frogs. He starred defensively with a perfect 1.000 fielding percentage. A former quarterback in high school, Boyers had 113 putouts and three assists in 116 chances. Offensively, he slashed .256/.347/.412.

Douglas Hodo III, center field, a Texas redshirt sophomore from Boerne — Hodo was a steady force both defensively and offensively. Switching from right field last year to play center this year, he produced a 1.000 fielding percentage with 126 putouts and one assist in 127 chances. Offensively, his slash line .311/.409/.518. He improved his batting average 30 points from last year. Hodo ripped a team-leading 24 doubles and scored 65 runs, which ranked second.

Jace Jung, second base, a Texas Tech redshirt sophomore from MacArthur — Considered one of baseball’s top prospects leading into MLB draft this summer, Jung led the Red Raiders with a .340 batting average and tied for the team lead with 14 home runs. He also produced 56 RBI. Jung’s home run production was down from last year, when hit 21, but it’s been traced to the way opponents pitched so carefully to him. Jung, the younger brother of Texas Rangers minor league standout Josh Jung, was fifth nationally with 58 walks.

Dalton Shuffield, shortstop, a Texas State senior from Johnson — In earning Player of the Year honors in the Sun Belt, Shuffield became the first Texas State player to do so since Paul Goldschmidt in 2009 … Goldschmidt is a six-time all-star in the major leagues … Shuffield led the Bobcats in hitting (.390), doubles (20) and runs scored (76). His slash line was a robust .390/.450/.686. Defensively, he struggled at times with 14 errors in 245 chances. Shuffield is Texas State’s career leader in doubles, triples and extra-base hits.

Tristan Stivors, relief pitcher, a Texas State senior from Medina Valley — Stivors was a rock in the Bobcats’ bullpen all season, utilizing a devastating breaking ball to ring up a nation-leading 17 saves. He also recorded an earned run average of 2.42, which was second on the team. For the season, Stivors struck out 72 and walked only 16 in 52 innings.

San Antonio-area baseball players crushed it on Sunday afternoon. Starring in four different games, in four cities, ball players who grew up in the area led their teams to victories. Here’s the way it happened:

Jace Jung, a Texas Tech sophomore from MacArthur — Hit a two-run homer in the ninth inning to win the game.

Travis Sthele, a Texas redshirt freshman from Reagan — Came out of the bullpen and pitched one and 1/3 scoreless innings to pick up his third win of the season.

Douglas Hodo III, a Texas redshirt sophomore from Boerne — Stroked an RBI double off the wall in the seventh inning for the seventh-ranked Longhorns.

Ian Bailey, a UTSA senior from Stevens — Enjoyed a four-for-five day with a triple, a double and two singles. He also scored four runs and drove in three.

Dalton Shuffield, a Texas State senior from Johnson — Belted a solo homer to lead off the bottom of the first. Went two for three on the day with three RBIs for the 10th-ranked Bobcats.

x-Rankings, according to D1 Baseball.

#BobcatsWin! Texas State takes down Louisiana 8-6 and earns its first series victory over the Ragin' Cajuns since 2004! Luke Sherley also recorded the first save of his career on Senior Day! #AllForTXST pic.twitter.com/UTOtnPiOxs

Trailing by four runs early, the Texas State Bobcats rallied to beat Louisiana 8-6 Sunday afternoon on ‘Senior Day,’ clinching both the series and a berth in the Sun Belt Conference tournament.

Texas State fell behind 4-0 in the top of the first, but did not back down.

By the end of the second innning, the Bobcats had pulled within one. In the fourth, they scored twice to take a 6-5 lead and never trailed again.

Louisiana won the first game of the series, 7-4, on Friday. Texas State bounced back to win 6-5 on Saturday.

By Sunday, they had won again, earning their second series victory over the Ragin’ Cajuns and their first since 2004.

Wes Engle started on the mound but was removed after failing to record an out. He did not concede a hit, but all three batters he faced reached base and scored, prompting coaches to call on Zachary Leigh (2-3).

The sophomore pitched well in earning the victory, giving up two runs on five hits in seven innings. Sherley got the save by pitching the ninth, his first appearance as a pitcher since high school.

The Bobcats play a non-conference game at Texas on Tuesday. They finish with three on the road in the Sun Belt against UT-Arlington. The Sun Belt tournament is set for May 22-27 in Lafayette, Louisiana.