Who was that masked man?

Why, it was Stanford University slugger Carter Graham, who celebrated each of his two home runs Sunday night by rounding the bases and then briefly donning a ‘Batman’ mask as he high-fived his way through teammates en route to the team dugout.

The reason for the invocation of the ‘Dark Knight’ into an NCAA tournament game against the Texas State Bobcats wasn’t entirely clear.

But as the game moved along, it became evident that the top-seeded Cardinal were not about to allow the Bobcats to play ‘The Joker’ and eliminate them from the playoffs. Not in an NCAA regional on their home field in Palo Alto, Calif.

Beaten by the second-seeded Bobcats on Saturday night, the Cardinal responded on Sunday by winning twice, once against UC Santa Barbara in the afternoon and then again against the Bobcats on Sunday night, both of them by scores of 8-4.

As a result, they ruined Texas State’s dream of a victory that would have clinched the school’s first title in a four-team NCAA baseball regional. Now, the same two teams will meet again Monday at Klein Field at Sunken Diamond in a winner-take-all for the championship.

The Bobcats raced off to a fast start, with Jose Gonzalez stroking a solo homer in the first inning for an early lead. It was Gonzalez’s third home run in the regional after hitting two in a 5-2 victory over the Cardinal on Saturday.

But Graham, not to be outdone, responded with a soaring two-run blast of his own in the bottom of the first for a 2-1 advantage. He added a three-run shot in the fourth inning, boosting the Cardinal into a 5-2 lead.

After the Bobcats scored single runs in the fifth and sixth to pull within one run, Drew Bowser hit a two-run homer in a three-run seventh, an uprising that seemed to take the starch out of the visitors from San Marcos, Texas.

Stanford’s offense was just too relentless to contain.

Not only did the Cardinal hit the ball over the fence three times, but they also sprayed line-drive singles to the outfield. They even scored on a squeeze bunt single by Adam Crampton that brought a runner in from third.

In all, the Cardinal produced 13 hits to only four for the Bobcats. Stanford pitchers Ty Uber (4-1), Brandt Pancer and Ryan Bruno combined for eight walks and seven strikeouts. Texas State starter Tony Robie (4-1) took the loss.

Robie pitched 4 and 1/3 innings and gave up five runs on eight hits. Offensively, the Bobcats were sparked by home runs from both Gonzalez and from San Antonio’s Dalton Shuffield, a senior from Johnson High School.

Texas State coach Steve Trout said: “You have to give credit to Stanford. They made some really big swings in big moments and did a good job with their arms as well. As I told the team, we are over it. This is the beauty of being in the winner’s bracket. You get to come back tomorrow and play one game to move onto the Super Regional.”

San Antonio-area baseball players crushed it on Sunday afternoon. Starring in four different games, in four cities, ball players who grew up in the area led their teams to victories. Here’s the way it happened:

Jace Jung, a Texas Tech sophomore from MacArthur — Hit a two-run homer in the ninth inning to win the game.

Travis Sthele, a Texas redshirt freshman from Reagan — Came out of the bullpen and pitched one and 1/3 scoreless innings to pick up his third win of the season.

Douglas Hodo III, a Texas redshirt sophomore from Boerne — Stroked an RBI double off the wall in the seventh inning for the seventh-ranked Longhorns.

Ian Bailey, a UTSA senior from Stevens — Enjoyed a four-for-five day with a triple, a double and two singles. He also scored four runs and drove in three.

Dalton Shuffield, a Texas State senior from Johnson — Belted a solo homer to lead off the bottom of the first. Went two for three on the day with three RBIs for the 10th-ranked Bobcats.

x-Rankings, according to D1 Baseball. 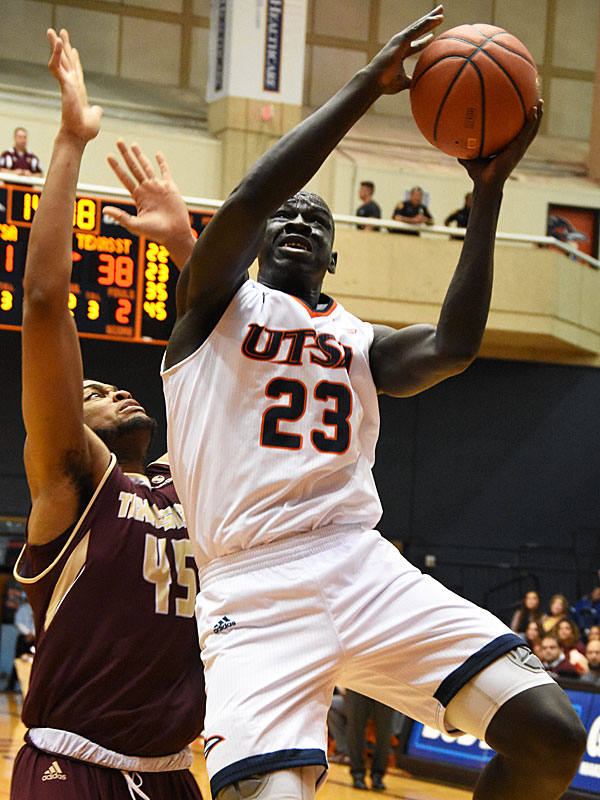 UTSA’s Atem Bior goes in for a shot against Texas State. 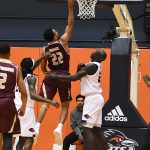 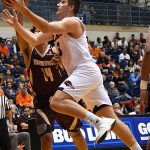 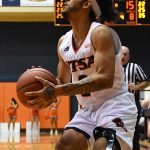 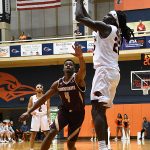 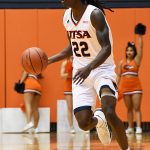 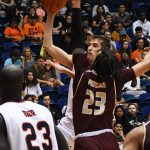 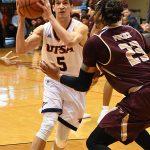 Giovanni De Nicolao drives to the bucket against Texas State. 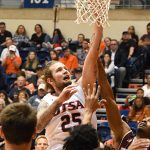 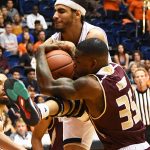 Nijal Pearson scored 17 points and Tre Nottingham had 16 Thursday night as the Texas State Bobcats held off the Louisiana-Monroe Warhawks, 55-52, for their sixth straight victory.

Texas State (13-7, 6-1 Sun Belt Conference) had a 14-point lead in the second half, struggled through a scoring drought and then held on at the end to secure the win.

The Cajuns rallied for a 77-65 win in Arlington against the UT Arlington Mavericks. It was the sixth straight win for Louisiana, winners of 13 out of 14 overall.