The TCU women’s basketball team knew it had been in a game Wednesday night after spending 40 minutes on the painted floor at Schollmaier Arena with the UTSA Roadrunners.

Playing at home in Fort Worth, the Horned Frogs held the Roadrunners to four of 15 shooting in the third quarter to take control of the proceedings, en route to a 74-67 victory.

Tomi Taiwo’s fourth 3-pointer of the game with 4:30 remaining in the fourth quarter gave the Frogs a 12-point lead. The Roadrunners never got closer than six the rest of the way.

Kyra White, playing point guard most of the night for the Roadrunners, had a solid all-around game with eight points, five assists and four rebounds.

Taiwo had 18 points and three steals to lead the Horned Frogs.

All told, it was a solid effort for the Roadrunners, who are two games into their second season under Coach Karen Aston.

The Roadrunners, despite foul trouble, played the Frogs of the Big 12 Conference on even terms in the first half. Guttadauro and Nwakamma each had eight points and a couple of three-pointers off the bench before intermission.

TCU led 23-16 after the first period and, after a competitive second period, held a 37-36 edge on UTSA. Playing better defensively, the Frogs boosted the lead to 54-47 entering the final quarter. 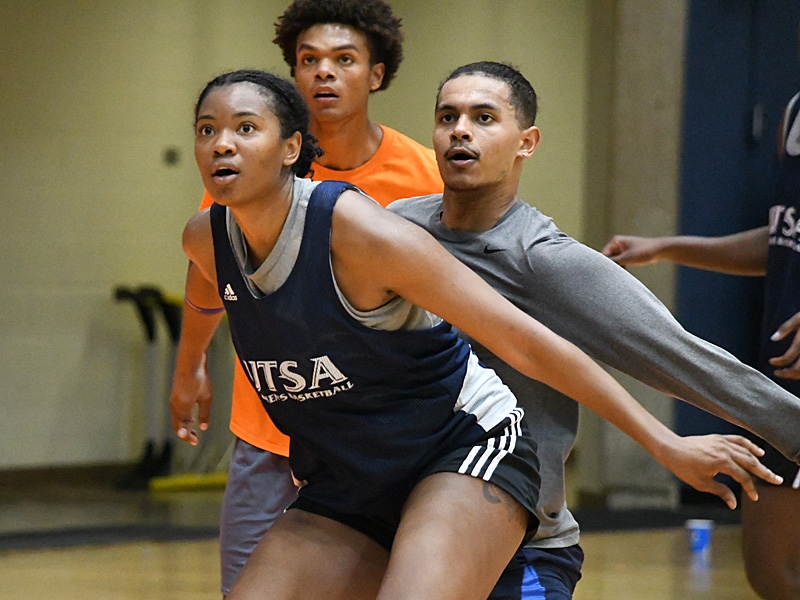 When the UTSA women’s basketball team first stepped on the floor to work out together this summer, the potential for a dynamic frontcourt presence showed up almost immediately.

Elyssa Coleman, a 6-foot-3 center, moved well in the low post and exhibited the ability to overpower opponents with her back to the basket. Newcomer Jordyn Jenkins, a 6-foot forward, came at the defense from all directions. 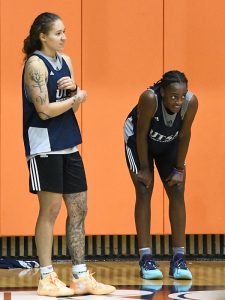 She was a shooter. She was a driver, and she could grab an offensive rebound and stick it back with good touch. Remarkably, two players with so much potential, playing for the UTSA Roadrunners?

In a way, it was sort of hard to believe.

The Roadrunners hadn’t had a winning record in women’s basketball in seven years, and yet here they were, practicing in a frontcourt tandem that looked as if it could hang with the best in Conference USA and perhaps against many teams in the nation.

For background, both players started their college careers at high major programs, Coleman at Texas and Jenkins at Southern Cal. Both came to UTSA to play for head coach Karen Aston. Coleman is in her second season with the Roadrunners, while Jenkins is in her first, after joining the team a few months ago.

How good will they be? How will their talents mesh? The answers may be a key to the success of the team this year. Coleman said at a UTSA media session earlier this week that she’s “super excited” about the prospect of playing with Jenkins, an all-Pac 12 talent.

“I think we’re getting there,” Coleman said. “Jordyn plays really, really fast paced, which is what I’m used to. We kind of had to slow it down last year because our team wasn’t there yet. But coach Karen teaches the same fast-paced ball, so I think it’s meshing pretty well.”

In Aston’s offense, Coleman is expected to play at the center position and Jenkins mostly at power forward.

“I think it’s going to be good,” Jenkins said. “She works hard and she’s strong and she’s a dog (as a fierce competitor). I think it’ll be good once we develop some more chemistry and get our passes going. I think we both catch and throw each other good passes. So, once we get our flow going, we should be good.”

Coleman offered a more colorful description about the twosome’s potential.

“That’s a scary, scary sight,” Coleman said. “That’s what I’m going to say. That’s a very scary sight with both of us down low. Not just us, but everybody coming off the bench. But for us, as a duo, that’s very scary. I’m really excited to see what we can do.”

Jenkins averaged 14.8 points and 6.7 rebounds last year at Southern Cal before she entered the transfer portal in the spring.

“I just wanted something better for myself,” she said. “I just felt like coming here was going to make me better physically and mentally. There’s a lot of support here and a lot of people care about you. (They) constantly give you high fives, keep you up.

“You know, it’s a tough lifestyle to be a student-athlete and wake up at 6 every day. You’re not going to be up for it every day. Just to have people care about you and ask how you’re doing. That’s really what you need.”

Jenkins’ has known Aston for years.

As a former head coach at Texas, Aston recruited Jenkins out of Kentridge High School in Kent, Wash. But when Jenkins entered the portal last spring, UTSA was just one of the schools in pursuit of her talents.

“But you get a coach that goes all out for you, you know?”

With that, Jenkins did not finish the thought, but her meaning was clear. After making the move, she’s comfortable with her surroundings. At USC, she gained valuable experience, playing in 41 games with 35 starts over two seasons.

Last season, she led the Trojans in both scoring and rebounding. She also hit 51.7 percent from the field — one of the best accuracy marks in the nation — and 82.1 percent from the free-throw line. Coleman, by contrast, had more modest success in her first season on the court in NCAA Division I.

The former standout at Atascocita High School in the Houston area averaged 7.9 points and 4.9 rebounds. Coming off a year in which she sat out rehabilitating a knee injury, she started slowly and then picked up the pace last February and March.

In a C-USA tournament game against UTEP, Coleman showed out with 21 points and 11 rebounds. As a result, the Roadrunners upset the Miners 58-57 in overtime and reached the quarterfinals, where they fell to the third-seeded Old Dominion Monarchs, 65-45.

Coleman committed to the Texas program during Aston’s last season in Austin. For the former prep star, the transition from high school to college was a whirlwind. After signing with the Longhorns, UT elected not to renew Aston’s contract in April 2020. Her new coach, Vic Schaeffer, came on board but she never really got to show the new staff what she could do.

She blew out her knee in a practice that summer, a month into the team’s workouts, all of which led to surgery in August 2020.

“That was Covid time,” she said. “Just got out of the pandemic. Just got into college. It was really scary for me. My support system wasn’t the best there. I grinded, for myself. Then once I got here and I had the people around me — it really does take a village — and I was fine.”

Coleman was traveling with the Longhorns in the 2021 NCAA tournament when something caught her attention. She saw online that Aston had been hired at UTSA.

“Once I was in the transfer portal, it was a no brainer,” she said, noting that she passed on offers from Wake Forest and Arizona State, among others. Last year was a struggle for the Roadrunners. Nobody was happy with a 7-23 record, but Coleman is optimistic about the team’s chances going into her second season.

Coleman said the chemistry is good right now considering eight new players on the roster. “Chemistry?” she asked. “Honestly? With the same timeline as last year, we’re way ahead, chemistry wise. I feel like everybody likes each other. It’s just going to be a matter of playing with each other.

“I feel like everybody is in a good spot with each other. We’re pretty close.”

Trailing by 13 points late in the first quarter, the UTSA Roadrunners kept plugging away and eventually edged the UTEP Miners 58-57 in overtime Tuesday in a Conference USA women’s basketball tournament opener.

With the victory, UTSA advanced to the next round to play Old Dominion on Wednesday at 11:30 a.m.

UTSA entered the tournament as the seventh seed in the C-USA West. Old Dominion is seeded third in the East.

Junior Destiny Thurman scored 23 for the Miners, who were seeded sixth in the East.

Karen Aston won her first game as coach of the UTSA Roadrunners Sunday afternoon at the Convocation Center, and all she could talk about afterward was what the victory meant for her players.

“I don’t have any personal satisfaction,” she said. “This is about them.”

Building an eight-point lead at halftime and a 10-point spread after three quarters, UTSA held on down the stretch to knock off the UIW Cardinals, 66-60.

It’s been almost a calendar year since the UTSA women last won a game, so that was what was most meaningful to Aston, a former coach at Texas.

“It’s huge,” Aston said. “It’s huge for them. This is a business where you go to practice every day and … (you) try to do the right thing. You want them to get the rewards for that, and they don’t always come. So when you do get them, you want to celebrate.”

Freshman center Elyssa Coleman, a transfer from Texas who is coming off two knee surgeries, led the Roadrunners with 14 points and 12 rebounds. The 6-foot-3 post hit 6 of 10 shots from the field

The Roadrunners had not won a game since last Dec. 15, at home, against Northwestern State, La., and Mass, a junior from Veterans Memorial High School in the Judson school district, admitted that it feels good to end the drought.

“It’s just the epitome of what we want to do for this program,” she said. “We’re just going to continue to work hard, stay humble and grind.”

For the Cardinals, guard Destiny Jenkins put on a show with some long-range shooting. Jenkins knocked down five 3-point baskets, including a few of them off the glass, in scoring 21 points.