A financial proposal under the new Name, Image and Likeness (NIL) rule in college sports was presented Tuesday morning to members of the UTSA women’s basketball team.

Roadrunners coach Karen Aston said it’s the first deal of its kind for her team as a group.

Details weren’t immediately available, but it sounded as if it might involve an appearance or appearances. At the end of practice, Aston invited two men attending the workout to talk to her players at center court.

The two spelled out the terms to the players and invited them to participate. Afterward, some players were reading the paperwork on the court.

“That’s a huge deal for this program, to have somebody invest in our young women,” UTSA coach Karen Aston said. “No matter what the amount and what the transaction is, or whatever you want to call it, just to have people that really care about women’s basketball and athletics in this city is something that I think could catch fire.

“It takes somebody to step up to the plate and be generous … and we’ll go from there. Like I said, I hope it catches fire.”

Aston declined to disclose the details, saying she wanted to go through the “proper channels” before she makes any statements in that regard.

“I knew they were coming to practice but I didn’t know they were presenting that,” she said. “That was a wonderful surprise for our coaching staff and our players. I’m happy for ’em. Again, every little bit matters.”

Aston said her team has individuals with “small building blocks of NIL,” but as for the whole entire team, “that was unexpected.”

“It was very generous,” she said.

In basketball-related developments, senior Hailey Atwood and junior transfer Kyra White have stepped up their level of activity in practices. Both took part in team drills.

Since the fall semester started, players have attended workouts and have worked out mostly on their own. Tuesday, both were involved in team sets on a limited basis.

“They’ve been in some halfcourt stuff,” Aston said. “They’re limited right now to half court. Kyra is a little bit ahead of Hailey. As far as being able to go a certain amount of minutes. But it’s definitely progress.”

Aston said she’s encouraged because both are experienced players. White played 77 games the past three seasons at Southern Cal. Atwood played 27 games and started 12 for the Roadrunners last season.

As a team, the coach said she likes the way the group is progressing defensively.

“I feel like any time you work on skills and actions in the summer and fall your defense is typically a little bit behind, and it is,” Aston said. “But we’ve concentrated (on it) the last couple of days, so I think we’ve made a little progress.”

The Roadrunners open their season on Nov. 7 against Stephen F. Austin.

When the UTSA women’s basketball team tips it off Monday in the first official practice session of the preseason, guard Kyra White will not be at full strength physically.

But, mentally? White will be as focused as anyone, trying to make the best of a fresh start in her career.

The former all-state player at Judson transferred from Southern Cal to UTSA in the offseason to continue her college studies, to play for coach Karen Aston and to play again in the San Antonio area.

“It feels amazing,” she said Thursday. “I’m truly blessed that coach Karen gave me the opportunity to come home and play in front of family and friends and, honestly, people who have seen me grow up and cheered for me, who always wished for my success.

“I’m honestly just ready to play with my team and get this thing started.”

White, nursing a quad strain, might not be able to go full speed right away. She’s working her way back slowly.

“I’m getting there,” she said. “I’m really ready. I believe I’ll be able to do a few things here and there. In no time, I’ll be out there on the court with my team, ready to play 100 percent.”

That should be good news for fans of the Roadrunners, who may remember her individual and team success at Judson.

With the Rockets, she played on teams that reached the state tournament in Class 6A three years in a row. In 2019, her senior year, Judson won state, claiming the crown with a three-point victory over DeSoto at the Alamodome.

White was one of the best players in the city. She was a three-time all-state, first-team honoree. She produced 1,600 points, 580 rebounds and 300 assists in her career.

A memorable moment came a little more than three years ago when the Rockets claimed the gold medal in the Class 6A state tournament.

“I had just turned 18 that year,” she said. “I’d gone to the state tournament the previous two years. So, in my senior year, we were like, all right, we got to do this. No ifs, ands or buts on our last time. So we just made it happen.”

UTSA women’s basketball has been down for several years, but it’s a trend that looks like it’s about to change.

The Roadrunners have eight new players on the roster, including White and all-Pac 12 forward Jordyn Jenkins, who both came from USC.

With both in the transfer portal last spring, UTSA coaches reached out to them. Both were aware of the possibility that they could continue as teammates. But, initially, White didn’t think it would happen.

“Jordy is a phenomenal player,” White said. “She’s one of the top three players I’ve ever played with. So when the conversation came about, I was a bit surprised.

“I didn’t really believe she wanted to come down here and make a difference with me, but all in all, we did plan this decision to come home, to play together and get some wins under our belt, and just put on for the city of San Antonio.”

White said she doesn’t know who talked to Aston first.

“There were never conversations from coach Karen, like, ‘Hey, you two come together,’ ” White said. “She was treating us both as individuals and just trying to win us both over, to play for her, not just as a package deal.”

When decisions were made, UTSA made announcements on the two separately, one day apart last April. White said she felt a surge of emotion when she found out that Jenkins would join her in playing for the Roadrunners.

“A lot of emotions ran through my body,” she said. “We had our journey out in California together, and just to be able to come down here, and put something else together and start a new chapter of our life together, it felt really good. We’re just ready to do it.”

For White, she said she did “a lot of self reflecting” in entering the portal. She figured that since she had earned a degree in psychology, she was ready to seek out new horizons.

“Sometimes you feel (it) when it’s your time to maybe just move on,” she said. “Ultimately, I went to USC, did what I needed to do and I just decided it was my time to get a different opportunity, be in a different environment and play for a different coach.”

Acknowledging that she had some other opportunities to play in the state of Texas, she picked UTSA.

“In talking to my family and doing some self-reflecting, I kind of knew I wanted to move closer to home,” she said. “I didn’t know if it was just in the direction of home or literally back home as I am now. But, just having those tough conversations and speaking it over with coach Karen, the rest of the staff and meeting the team, you kind of just feel where you’re supposed to be.

“When I came on my visit, I just knew I belonged.”

White’s role with the Roadrunners is expected to be multi-faceted. She played 77 games and started 22 at USC, so her experience will be invaluable.

Coaches with the Trojans didn’t ask White to shoot the ball or score. She averaged only 1.3 points. But coaches with the Roadrunners are hoping they can untap some of her offensive potential from the guard and small forward positions.

“We’re trying to get her to get confidence in her shot, really be confident shooting the basketball and attacking the rim,” Aston said. “She’s just got so much IQ and feel for the game. The key for her is getting in a good mental space so she can score the ball. You can post her up. You can do a lot of things with her … ”

When White confirmed that she has two years of eligibility remaining with the Roadrunners, a smile creased her face.

“Yes sir,” she said. “Two years. It’s great. We’re trying to start something this last year in Conference USA. We’re trying to leave the best impression we can. I believe we have the right tools and the right girls who are willing to be coachable and taught and ready to lean on each other when things get tough. 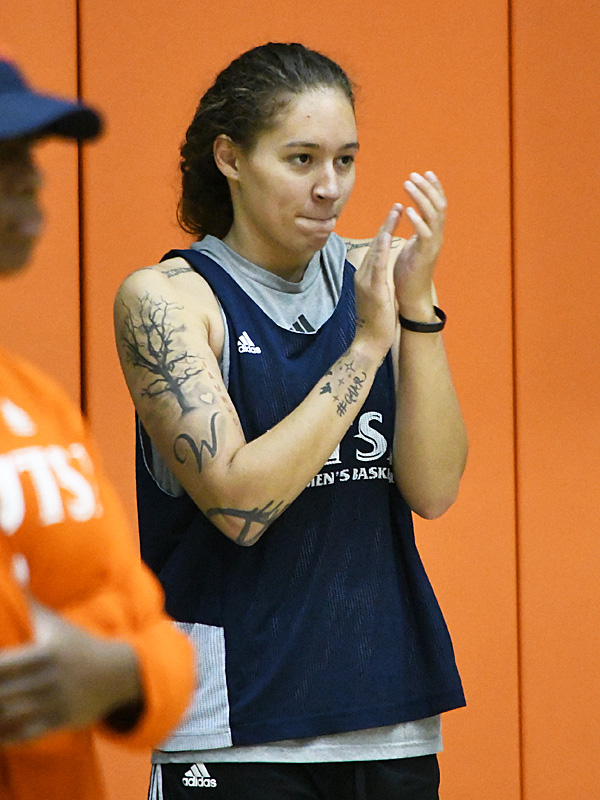 Athletes from the San Antonio area

Editor’s note: With practices in NCAA Division I basketball starting this week and next, The JB Replay is taking a look at women from the San Antonio area and where they will play this season. This list likely does not include everyone from the area in Division I. It’ll be updated when any additions come to light. — Thanks, Jerry