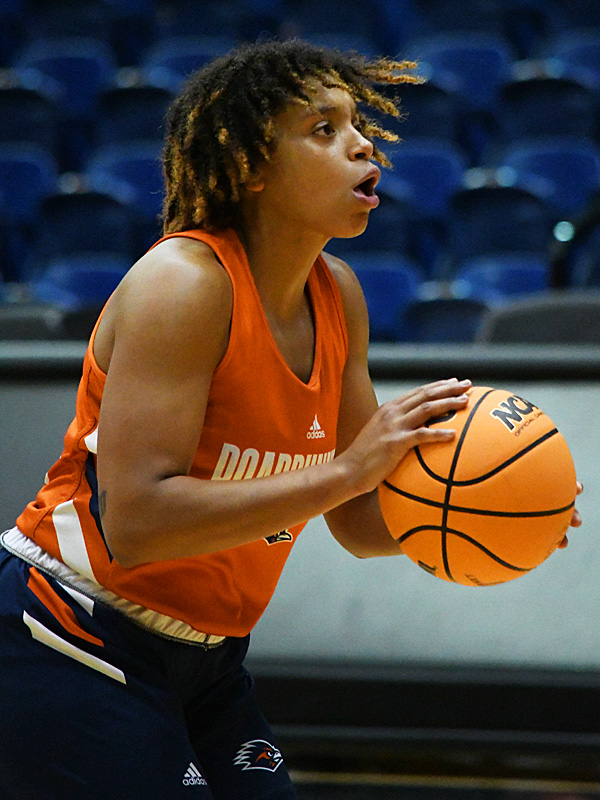 Hailey Atwood, a senior guard from Austin, has returned to practice on a full-speed basis after a few months rehabilitating an Achilles injury. – Photo by Joe Alexander

Refining her skills and building stamina gradually, UTSA senior guard Hailey Atwood on Monday morning expressed optimism not only for her successful comeback from a sore Achilles, but also for the team’s chances to register a winning season. 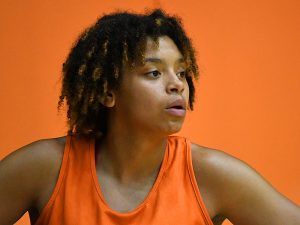 Both Atwood (above) and Kyra White were limited by minor injuries early in the fall semester, but both are expected to be ready to play when the Roadrunners open the season Nov. 7 at Stephen F. Austin. . – Photo by Joe Alexander

She said it’s hard to estimate where she is physically after going through her first full-contact practice of the preseason.

“I’ve been battling that Achilles injury and getting that better over the last two months,” she said. “Today was actually my first practice, full go, full court. So I think the main thing for me is getting back into shape.”

The season opener for the UTSA women is Nov. 7 at Stephen F. Austin. The Roadrunners haven’t had a winning season since a 16-15 record in 2014-15. Atwood said she wants the team to think bigger than that.

“I feel like that’s the bare minimum expectation,” she said. “We were ranked No. 9 (in the Conference USA preseason poll.) I think it’s disrespectful. No one sees the hard work that we’ve been putting in, and, yeah, every team in this conference is putting in that work.

“But I think we have high expectations … We’re aiming for more than just a winning season.”

On an individual level, Atwood is working hard to make up for practice time lost to rehabilitation on her Achilles.

“Obviously, it’s October and it’s kind of a hard place to start, to just be thrown into the fire,” she said. “For me I would say I’m at, like, 88 percent. Those 12 percent are like polishing up on the things I missed and getting back in shape.”

UTSA finished 7-23 last season, in Karen Aston’s first year as coach at the school. A core of six players from last year return, including four of them who averaged more than 20 minutes per game — center Elyssa Coleman, plus guards Queen Ulabo, Deborah Nwakamma and Atwood. Two others are Kyleigh McGuire and Kennedy Harrell.

“In the spring, we spent a lot of time doing a lot of one-on-one and two-on-two stuff,” Aston said in an interview last week. “I thought all the players that returned for us improved a lot. I feel bad for Hailey that she’s been out, because she might have been the most improved of all the returners.

“If you look at all of them, their shooting is significantly better. Their ball skills are better, and that’s because of the work that the coaches have put in with them.”

Atwood and newcomer Kyra White were among players limited with minor injuries at the start of the fall semester, and now both are taking part in all team activities. On Monday, one group of players showed off a good-looking flow in 5-on-5, full-court action.

The five consisted of Coleman and Jordyn Jenkins on the front line, with White and Nwakamma on the wings and freshman Sidney Love at the point guard. Jenkins and White are newcomers, transfers from Southern Cal.

A second group consisted of Jenkins and Maya Linton in the frontcourt, with Ulabo and Atwood on the wings and Siena Guttadauro at point guard. Linton and Guttadauro are freshmen.

Last season, Atwood came in from junior college and played in 27 games, starting 12 for the Roadrunners. Pushing through physical problems, she averaged 3.4 points and 4.3 rebounds in 21.9 minutes.

Atwood called last season a “rough experience” for her both “basketball-wise and life-wise.” She wasn’t sound physically, coming in off a knee injury. A former junior college standout at Blinn, she was also trying to figure out the pace of Division I competition.

On top of the usual issues faced by players taking a step up to the next level, Atwood suffered a personal loss when her great grandmother passed away. If that weren’t enough, she also contracted Covid.

“After that, I just never got back in the flow of things,” Atwood said. With the experience behind her, the 5-foot-8 Austin native said she does feel better this season, just in knowing what Aston and the other coaches expect of her.

Mainly, she knows she needs to play her role and to take care of her own job individually. Also, perhaps most importantly, she realizes the importance of giving maximum effort.

Averaging 18.5 points and seven rebounds in 2020-21 at Blinn College, the former Austin Bowie High School standout is a player who could make a significant impact on the Roadrunners’ rebuilding effort this year.

In shooting drills, she shows off a stylish form — unleashing the ball on a high-arc, with perfect backspin. She said it’s something she has developed at UTSA, by getting “down into” her shot and then following through after her release.

“Obviously, I’m going to continue to shoot,” Atwood said. “My mid-range is definitely better than my 3-pointer. A lot of that came from when I was injured. The reps I would get (were) in the mid-range. Being able to extend my range out, it’s going to help me.”

As for the team, Atwood senses that players are meshing well, in spite of all the newcomers and returners just getting to know each other personally and as players.

A financial proposal under the new Name, Image and Likeness (NIL) rule in college sports was presented Tuesday morning to members of the UTSA women’s basketball team.

Roadrunners coach Karen Aston said it’s the first deal of its kind for her team as a group.

Details weren’t immediately available, but it sounded as if it might involve an appearance or appearances. At the end of practice, Aston invited two men attending the workout to talk to her players at center court.

The two spelled out the terms to the players and invited them to participate. Afterward, some players were reading the paperwork on the court.

“That’s a huge deal for this program, to have somebody invest in our young women,” UTSA coach Karen Aston said. “No matter what the amount and what the transaction is, or whatever you want to call it, just to have people that really care about women’s basketball and athletics in this city is something that I think could catch fire.

“It takes somebody to step up to the plate and be generous … and we’ll go from there. Like I said, I hope it catches fire.”

Aston declined to disclose the details, saying she wanted to go through the “proper channels” before she makes any statements in that regard.

“I knew they were coming to practice but I didn’t know they were presenting that,” she said. “That was a wonderful surprise for our coaching staff and our players. I’m happy for ’em. Again, every little bit matters.”

Aston said her team has individuals with “small building blocks of NIL,” but as for the whole entire team, “that was unexpected.”

“It was very generous,” she said.

In basketball-related developments, senior Hailey Atwood and junior transfer Kyra White have stepped up their level of activity in practices. Both took part in team drills.

Since the fall semester started, players have attended workouts and have worked out mostly on their own. Tuesday, both were involved in team sets on a limited basis.

“They’ve been in some halfcourt stuff,” Aston said. “They’re limited right now to half court. Kyra is a little bit ahead of Hailey. As far as being able to go a certain amount of minutes. But it’s definitely progress.”

Aston said she’s encouraged because both are experienced players. White played 77 games the past three seasons at Southern Cal. Atwood played 27 games and started 12 for the Roadrunners last season.

As a team, the coach said she likes the way the group is progressing defensively.

“I feel like any time you work on skills and actions in the summer and fall your defense is typically a little bit behind, and it is,” Aston said. “But we’ve concentrated (on it) the last couple of days, so I think we’ve made a little progress.”

The Roadrunners open their season on Nov. 7 against Stephen F. Austin.