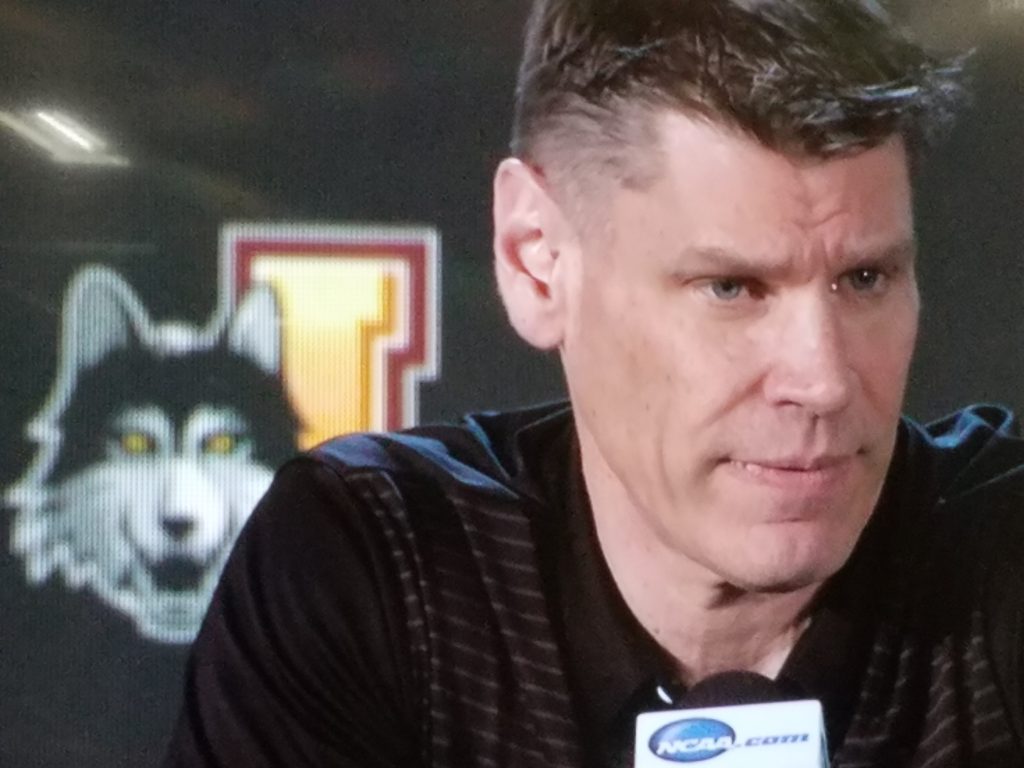 Coach Porter Moser has led Loyola-Chicago to its first Final Four in 55 years.

In writing sports since the days of the 53-team NCAA Tournament, I’ve covered basketball for a good chunk of my career, but I never got a chance to meet the late Rick Majerus.

And really, all I can say about that is, it’s a damned shame.

From all accounts, Majerus was smart, funny and dedicated to his craft.

That’s why I got a kick out of listening to Loyola-Chicago coach Porter Moser Thursday at the NCAA Final Four media session.

Moser addressed a question about what a coincidence it is for his Loyola team to arrive in San Antonio 20 years after his mentor, Majerus, brought his Utah Utes to the city in 1998.

For Majerus, it was his one and only trip to the Final Four.

“I remember seeing coach Majerus in a white T-shirt that said, ‘Utah Utes,’ and his team walking out (to the court),” said Moser, who worked then at Texas A&M. “I remember going, ‘Holy Cow, look at how big that team (is).’ I remember seeing them at a restaurant on the River Walk.

“I remember that vividly.”

In 2007, the coaches’ careers intersected again. Majerus, then the head coach at Saint Louis, threw Moser a life line, of sorts.

Fired after four years as head coach at Illinois State, Moser joined Majerus as an assistant.

The two spent four years together, until another opportunity presented itself to Moser.

In 2011, Loyola handed him the head coaching job. Now, Moser has led the Ramblers to their first Final Four in 55 years.

Moser reminisced about his days at Saint Louis with Majerus, who died of heart failure in December 2012.

In the semifinals, the Andre Miller- and Michael Doleac-led Utes knocked off the North Carolina Tar Heels, 65-59. But in the finals, the Tubby Smith-coached Wildcats prevailed, 78-69.

“It physically bothered him to lose that game,” Moser said, “and he talked about it.”

Because the Loyola coach has looked up to Majerus so much, he said bringing his team to San Antonio this year is special.

He said people ask him often about what Majerus would say about the Ramblers, who have stormed through regional play as a No. 11 seed, all the way to San Antonio.

Loyola will play the Michigan Wolverines in the first of two NCAA semifinals Saturday.

The Ramblers will play the Michigan Wolverines in the first of two NCAA semifinals Saturday.

“We’ve got to be the first team in Final Four history to win the first four games with no dunks” Moser said. “It’s a stat I’m not proud of.

“But I think (coach Majerus) would be proud of our guys and how unselfish (they are) and how they share it.” 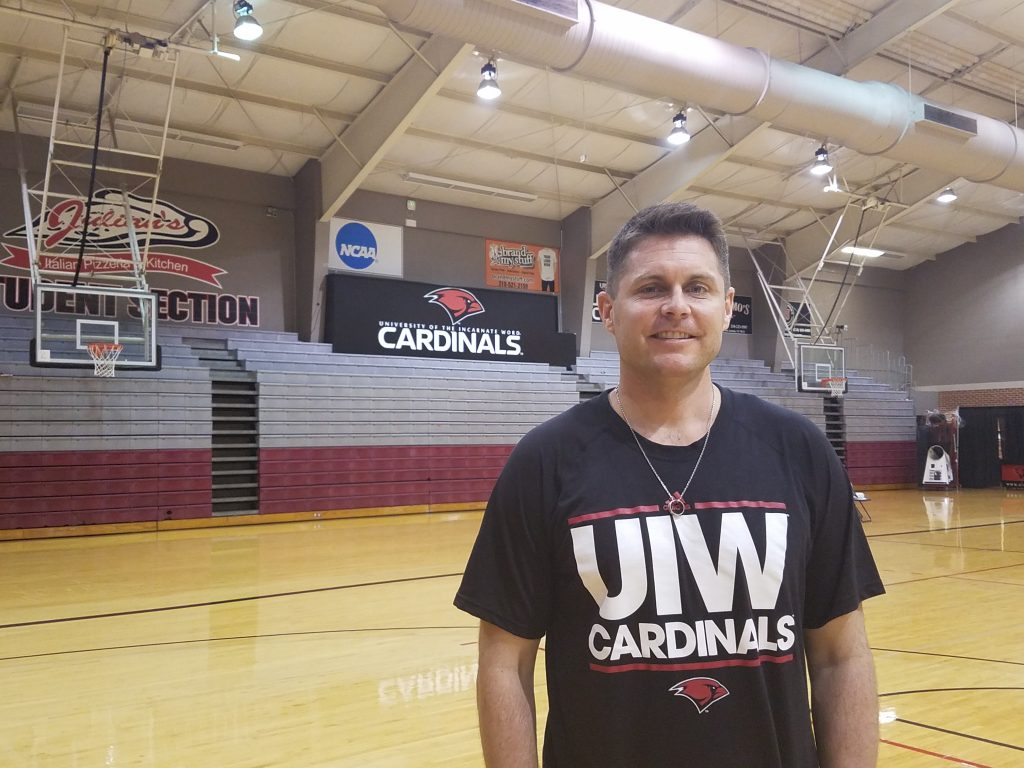 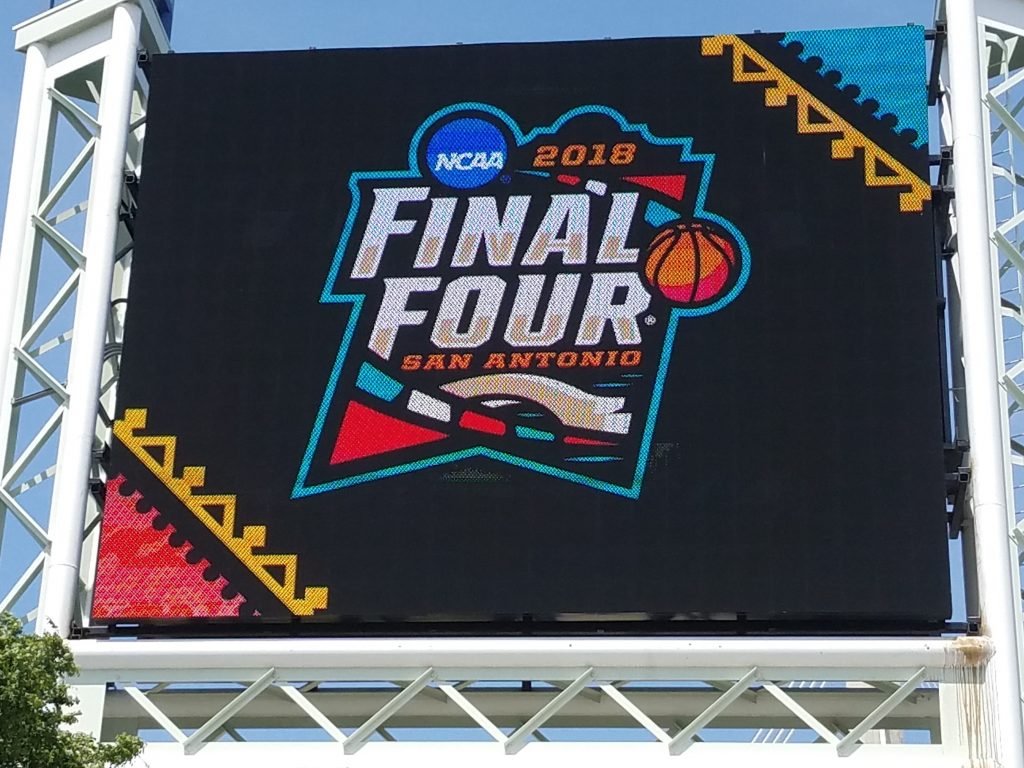 Welcome to the NCAA Final Four in San Antonio, from The JB Replay.

The NCAA Final Four is set to tip off Saturday at the Alamodome, with Loyola-Chicago playing Michigan at 5:09 p.m. Villanova takes on Kansas in the second of two national semifinals at 7:49. Here’s a quick glance at each team:

Reasons to believe: With a 98-year-old nun known as Sister Jean cheering them on, the Ramblers called on different players to hit game-deciding shots in the last 10 seconds of their first three tournament games. Loyola then won going away against Kansas State.

Reasons to believe: Wolverines play tough defense, yielding only 63 points per game. Most of their games are of the grind-it-out style, but they can play fast, as evidenced by a 99-point explosion against Texas A&M in the Sweet 16.

Reasons to believe: The Wildcats always seem to have the answers in big moments, most notably point guard Jalon Brunson. Both Brunson and Phil Booth played major roles in ‘Nova’s 2016 national championship.

Reasons to believe: Jayhawks point guard Devonte’ Graham is playing with supreme confidence. Guards Malik Newman, Lagerald Vick and Svi Mykhailiuk all hit big shots against Duke. Bill Self has the mojo. He won here in 2008. 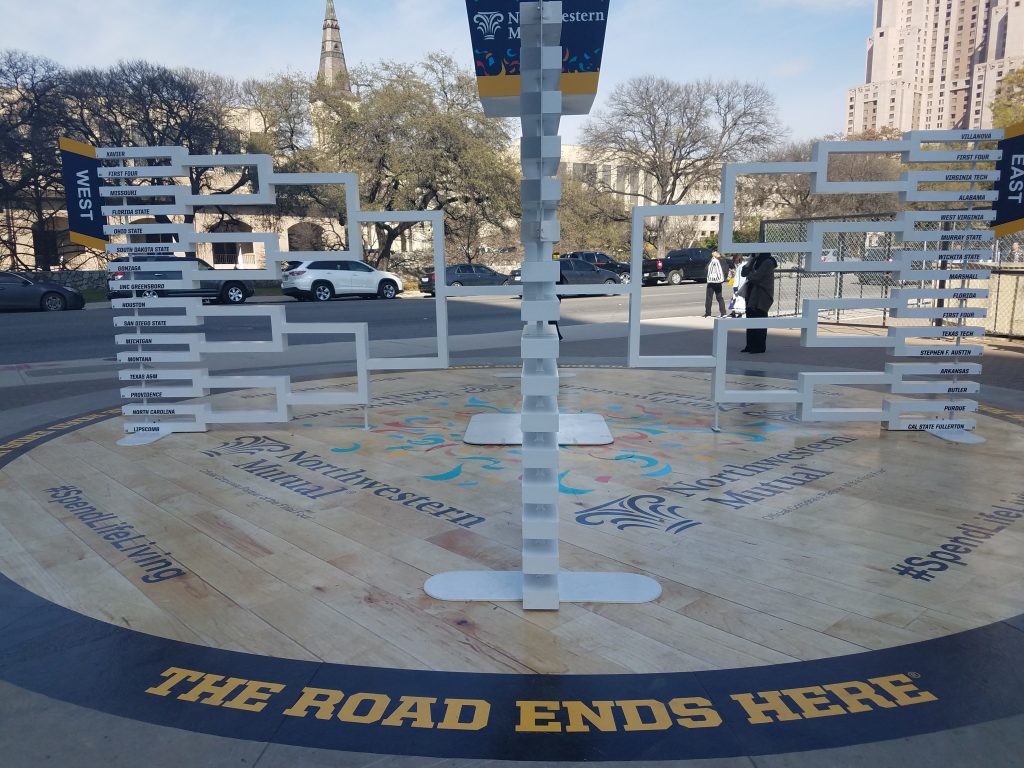 In what could be viewed as a boost for all the underdogs in life, the Loyola-Chicago Ramblers have qualified to play in the NCAA Final Four.

The 11th-seeded Ramblers claimed their ticket to San Antonio with a 78-62 victory over Kansas State Saturday in Atlanta for the South Regional championship.

It is Loyola’s first trip to the Final Four since the Ramblers won the 1963 NCAA championship.

Winners of 14 in a row and 21 of their last 22, the Missouri Valley Conference champions tied with three other programs in the modern history of the tournament as the lowest seed to reach the national semifinals.

In addition, a basketball coincidence has emerged with Loyola-Chicago coach Porter Moser coming to the Alamodome.

The late Rick Majerus brought his Utah Utes to the Final Four in 1998 in San Antonio’s first year to host the event.

Rising through the coaching ranks, Moser always considered Majerus as one of his mentors.

He worked on Majerus’ staff at Saint Louis for four years before taking the job at Loyola-Chicago in 2011.

“It’s hard to quantify all the things I got from him,” Moser, the MVC Coach of the Year, told the Chicago Tribune recently. “I made the most of four years with him as a friend and a coach.”

Lowest seeds to the Final Four

No team seeded lower than No. 11 has ever made it to the NCAA Final Four since 1985, according to The Sporting News.

The following are the lowest seeds to make it:

The sights from an unforgettable night in Dallas with 18,000 of our closest friends.

Texas Tech advanced to the Round of 16 in the NCAA Tournament for the first time in 13 years Saturday night following a 69-66 victory over Florida in an East Regional second-round game at Dallas.

It’s a stunning achievement for the Red Raiders, who were picked in the preseason to finish in the middle of the pack in the Big 12 Conference.

Second-year Texas Tech coach Chris Beard told a television reporter for TBS that he has always been driven to prove people wrong.

As a result, third-seeded Tech (26-9) will move on to Boston next week to face either Purdue or Butler.

The Red Raiders last played in the Sweet 16 in 2005 when they defeated UCLA and Gonzaga in Tucson before losing to West Virginia, 65-60, in the regional semifinals at Albuquerque, New Mexico.

Bob Knight was in his fourth season as Tech’s coach at the time.

Jordan Poole hit a long three-pointer to beat the buzzer as the third-seeded Michigan Wolverines ousted No. 6 Houston 64-63 in a Round of 32 West Region thriller at Wichita, Kansas.

The Cougars had a chance to advance to the Sweet 16 for the first time in 34 years but couldn’t stop the Wolverines from making the winning play with a possession that started with 3.6 seconds remaining.

Michigan inbounded the ball from its own baseline. The pass went to Muhammad-Ali Abdur-Rahkman, who passed to Poole on the right wing.

Poole elevated with pressure from a Houston defender and, with legs splayed, hoisted the shot that lifted Michigan into the Sweet 16 for the second straight year.

Clayton Custer’s jumper with 3.6 seconds left boosted the 11th-seeded Loyola-Chicago Ramblers into the Round of 16 with a 63-62 victory over No. 3 Tennessee in a South Region game at Dallas.

The Volunteers had a chance to win at the buzzer, but Jordan Bone misfired on a contested three from top of the circle.

With the victory, Loyola-Chicago emerged as the only double-digit seed to win a second-round game on Saturday, with three more — UMBC, Butler and Syracuse — playing Sunday.