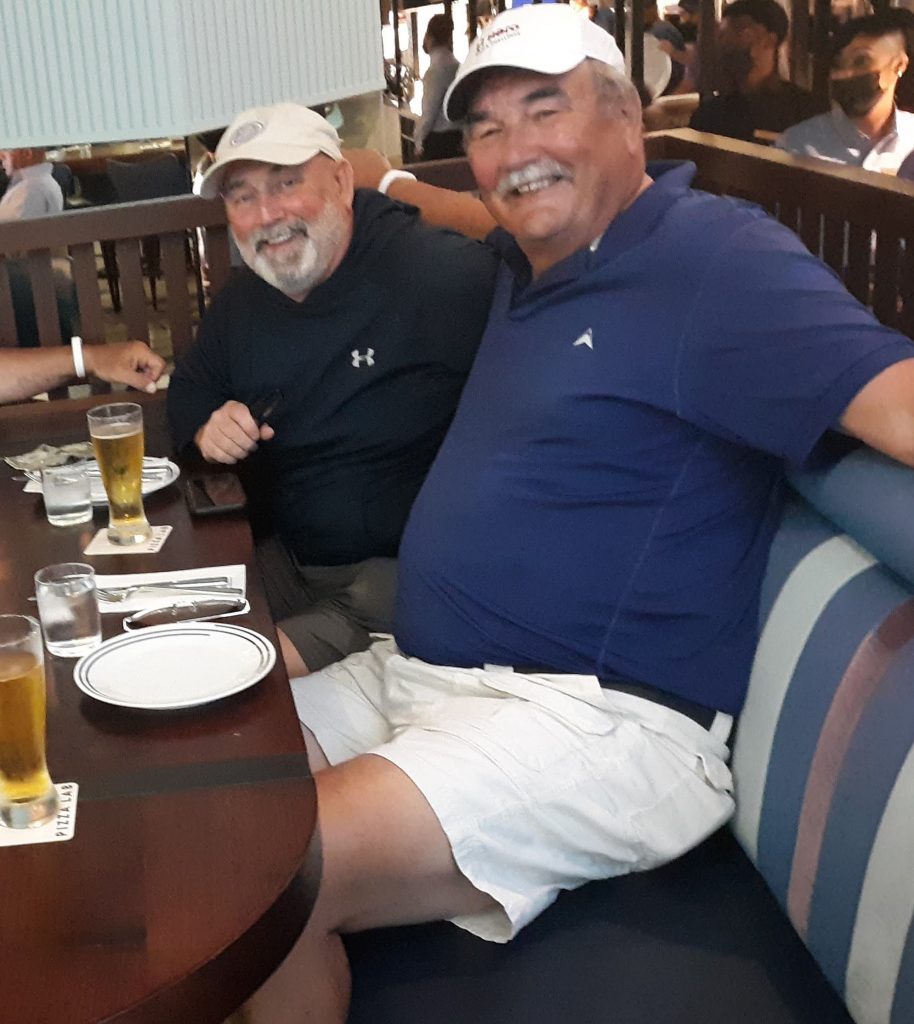 Tom Reiter (right) and friend John Conway are expected to leave Sunday on a trip to Scotland for the British Open. Reiter will chronicle his trip to St. Andrews for The JB Replay.

Editor’s note: Good morning, all. Today, you’ll be treated to a piece from my old friend Tom Reiter, who discusses the genesis of his upcoming trip to the British Open.

In his essay, he quotes from a wide range of pop culture icons. From Charles Schulz, the “Peanuts” comic-strip creator. Also, from the soundtrack to a 1965-movie classic, “The Sound of Music.” For the kicker, he throws in a line from “The A-Team,” a 1980s-era action television series.

I hope you enjoy Tom’s work. The 70-year-old North Carolinian is scheduled to take a commercial flight on Sunday morning — winging his way to New York and then on to Scotland — for next week’s 150th anniversary of The Open Championship.

It was a dark and stormy night (sorry, Snoopy) when the first seeds of a plan were planted in my brain. On April 6, 2020, I read the following statement issued by organizers of the British Open: The R&A has decided to cancel The Open in 2020 due to the current Covid-19 pandemic. The Championship will next be played at Royal St George’s in 2021.

Was it possible that as the pandemic sowed quite a bit of uncertainty and some fear into our lives, the R&A was throwing me a lifeline? As a long time sports fan, I was suffering through a myriad of cancellations. NCAA Women’s Final Four tickets purchased a year before now became just another piece of memorabilia. My brackets were as unfilled as my desire to attend the basketball festivities in New Orleans.

If I were a comic strip character, a balloon above my head would depict either a tree branch about to fall or a light bulb shining brightly, because an idea was about to form. An idea that could sustain me through this epic plague, along with shots and booster shots. The R&A’s announcement, to me, was a lifebuoy thrown from the deck of a ship. I grabbed it and was reminded of a line from ‘The Sound of Music,’ as Maria von Trapp exclaims, “When The Lord closes a door, somewhere, He opens a window.” For many, a door closed when the 2020 Open Championship was cancelled. But for me a window opened, a window that I would jump through for the next 26 months.

A plan begins to form

Although I only taught English for some 40 odd years, I was very proud of my math skills and those skills immediately went to work following cancellation of the 2020 Open. In assessing the situation, I noted that the 150th Open Championship would no longer be played at Royal St. George’s in 2021 but at St. Andrews in 2022. It was fate. In my 70th year, I was going to the birthplace of golf.

As a good buddy of mine was fond of saying, “Wishing it don’t make it so.” I quickly realized there would be many hurdles to clear and I’m no Edwin Moses. First and foremost I had to determine if my dream was even feasible. Heading straight to my computer, my Internet search began. Getting tickets was going to be through a worldwide lottery and I certainly did not want to leave my journey up to chance. I wanted a guarantee, so I started looking at packages. Narrowing it down to two companies was easy. I found two — Voyages Golf and Golfbreaks. Both were licensed by the R&A to offer packages to The Open. The cost was similar so I decided to go with the one headquartered in the USA, Golfbreaks.

After several phone calls, I had decided on a package that would give me a week’s lodging in Dundee (breakfast included) and a Wednesday-Sunday ticket to the championship all for just under $3000, based on double occupancy. Okay, one hurdle jumped; it was feasible. Hurdle number two was my wife of nearly 50 years. Rather than beat around the bush, I just explained why I wanted to go (although not a golf fan, she did know about the British Open and St. Andrews) and how much it would set us back. How could I forget her wonderful reply, “Just get someone to go with you because I’m not.” Hurdle number two jumped but perhaps the toughest hurdle loomed directly ahead. How do I find someone as crazy about this idea as I am?

My two best buds were still in New York. Chris, a teacher and colleague of mine before I retired and John who I worked and coach with for a dozen years and like me had recently retired. I sent them a link to my Golfbreaks package. I didn’t ask either John or Chris to join me, but rather I was just sharing my trip with them.

I was pleasantly surprised when I read John’s text which simply said, “I’m in.” Two days later and a $600 deposit by each of us we were locked in to the 150th Open at St. Andrews. As Hannibal Smith on “The A Team” often announced, “I love it when a plan comes together.”