Trailing by 12 points early in the second half, the Incarnate Word Cardinals rallied at home Saturday night to beat Nicholls State, 65-58, for their first Southland Conference victory under new coach Carson Cunnningham.

In addition, Augustine Ene added 10, and Dwight Murray Jr. contributed 8 points and 7 assists with no turnovers.

Both Brown and Smith have started to come on for the Cardinals. In his last four games, Brown is averaging 18 points on 60 percent shooting from the field. Smith, a freshman from Westerville, Ohio, is averaging 13.3 points in his last three on 57 percent.

“He’s a workhorse. He’s always in the gym. Even after tonight, he’ll be working on his game. That’s what I love about him. He pushes me at practice, and I push him. I’m glad to have him on my team.” — UIW senior Charles Brown III, on Antoine Smith, Jr. 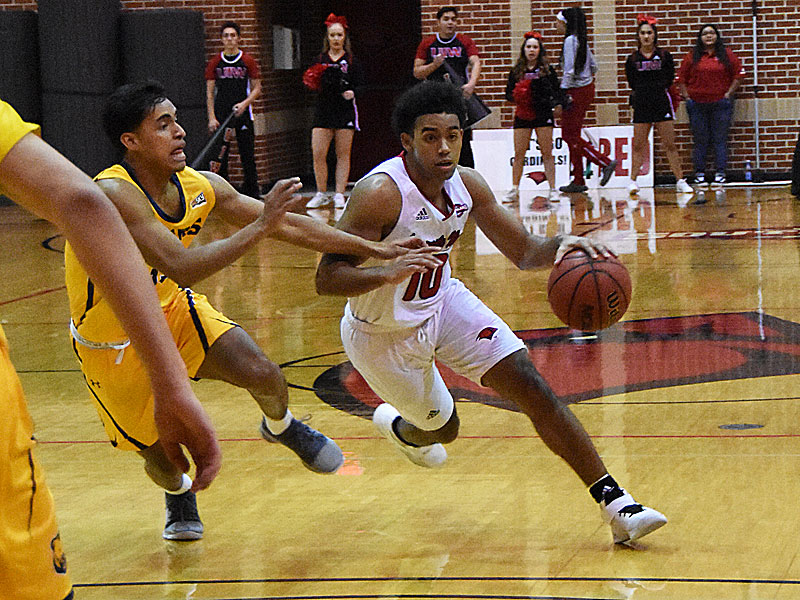 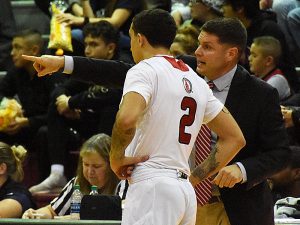 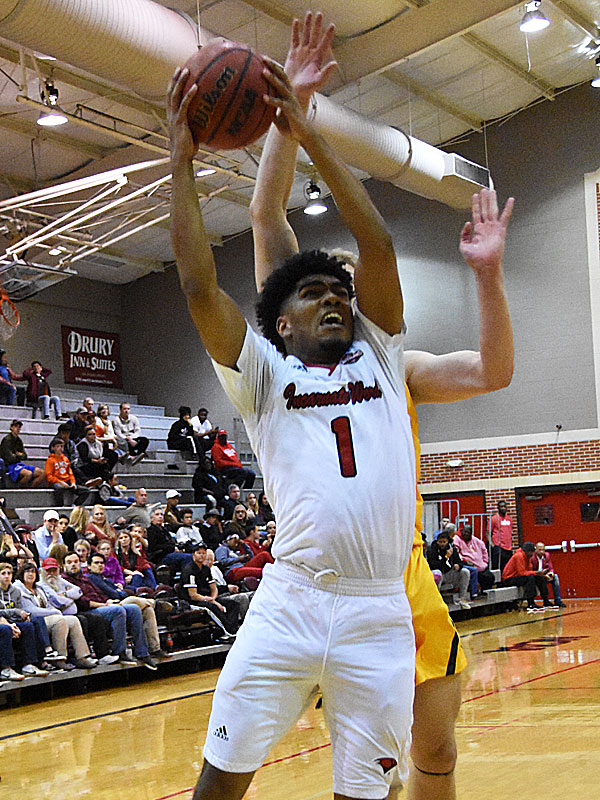 Freshman guard Morgan Taylor arrived at the University of the Incarnate Word this summer with a nickname of “Mo-Buckets.”

Taylor lived up to the billing Saturday, hitting the winning shot in an 80-78 overtime victory over North Dakota State at The Islands of the Bahamas Showcase.

The Bison led by 15 points in the second half but could not hold off the Cardinals on the second day of the tournament in Nassau, Bahamas.

UIW, under new coach Carson Cunningham, battled from behind in the final minute of overtime for their first win of the season against an NCAA Division I opponent.

On the other end of the floor, North Dakota State’s Cameron Hunter made a move to the basket, and was fouled, and hit two free throws to tie it.

After a UIW timeout, the Cardinals worked the ball to Taylor, who hit the winning shot with 26 seconds left for the eventual final score.

UIW of the Southland Conference escaped with the win when North Dakota State’s Vinnie Shahid missed a three-pointer.

Taylor finished with 24 points, five rebounds and two steals for the Cardinals, who improved their record to 4-2 on the season.

Tyson Ward scored 14 to lead the Bison, followed by Rocky Kreuser (13) and Jared Samuelson (12). With the loss, North Dakota State of the Summit League fell to 1-3.

Taylor played under coach Gene Nolan at Marist High School in Chicago. He averaged 21.8 points in his senior year at Marist. 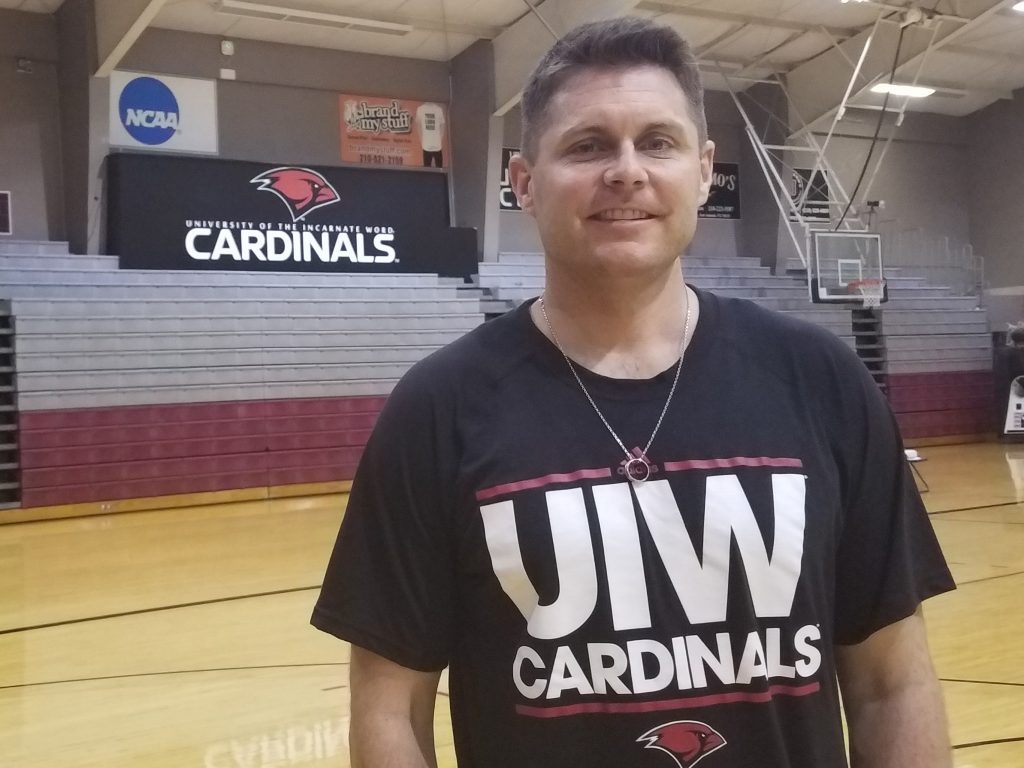 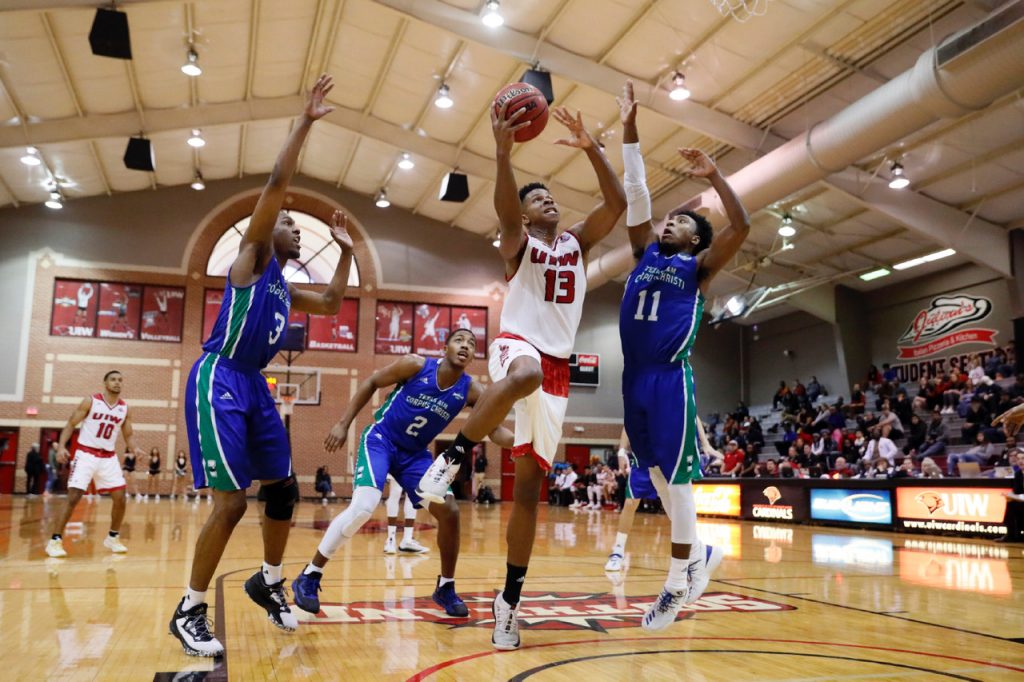 The Wildcats held UIW to 27 percent shooting in the second half in rallying from a four-point halftime deficit.

Trailing by nine points, Incarnate Word rallied Saturday into a 37-33 halftime lead over Abilene Christian in the regular-season finale for both teams.

Finally, Sam Burmeister drained a three pointer at the buzzer (see video above) to lift the Cardinals into a four-point lead at the break.

The game was played in front of an announced crowd of 1,256 at UIW’s Convocation Center.

Senior Jordan Howard lived up to his reputation as one of the nation’s top scorers Wednesday night by pouring in a career-high 41 points in a 92-76 home victory for Central Arkansas over slumping Incarnate Word.

Jordan Howard is the older brother of Marquette sophomore Markus Howard, who scored an NCAA season-best 52 points in an overtime victory at Providence last week.

Trailing by 23 points at intermission, UIW out-scored Central Arkansas 25-9 in the first seven minutes of the second half to pull within 62-55.

But the Cardinals couldn’t sustain the run and got hit with an 18-7 run from the Bears to fall behind by 15, effectively putting the game out of reach.

UIW plays next on Saturday at Stephen F. Austin in Nacogdoches. Tipoff is at 6 p.m. on ESPN3.

It’s back to the film room for UIW coaches a day after an 85-74 home loss to the Sam Houston State Bearkats.

Clearly, the Cardinals will need to figure some things out before this week’s Southland Conference road trip to Central Arkansas and Stephen F. Austin.

Yes, UIW has lost five in a row. And, yes, senior point guard Jalin Hart says he expects to be out two weeks getting some academic issues resolved.

But that doesn’t mean the Cardinals (5-8, 0-3 SLC) can’t get some momentum going during a stretch of four-of-five games on the road over the next three weeks.

Here are a few reasons to hold out hope for the Cardinals in their quest to reach the SLC tournament.

No. 1, power forward Charles Brown III (jersey No. 13 in your program) is playing well. See video below.

As mentioned, UIW faces a tough stretch in the schedule — at Central Arkansas and at Stephen F. Austin. Then home against Lamar and back on the road again to New Orleans and Houston Baptist.

But the presence of Brown on the floor may command a double team, even on the road, if he can keep hitting shots like this:

Another intriguing talent at UIW is redshirt freshman Christian Peevy.

In the second half against Sam Houston when the Bearkats made their big run, Peevy seemed to lose some confidence, not unusual for a young player.

But in the first half he showed some grit on the defensive end, taking a charge, and then displayed nice touch on a mid-range jumper.

Senior Sam Burmeister, the coach’s son, played a solid all-around game against the Bearkats, scoring 16 off the bench on 6 of 10 shooting.

Burmeister is a tenacious competitor and can hurt an opposing team with his long-range accuracy.

We have the evidence:

With Hart out of the lineup, Cody Graham will start. And, if you missed it, that was Graham getting into the paint and kicking out a pass to Burmeister in the video clip above.

Other players will need to step up. Forward Simi Socks didn’t seem comfortable in the offense against the Bearkats. Socks can score and is just in a funk right now.

I also think 7-foot Konstantin Kulikov will be OK. But Kulikov played only one minute against Sam Houston. Coaches just seemed hesitant to put him on the floor.

A key to any long-range aspirations for the Cardinals is true freshman Keaton Hervey, who has been erratic, while also showing flashes of talent.

Here’s a clip of Hervey, dunking in the first half:

Of course, after Hervey’s dunk, UIW coaches took him off the floor because of some sort of strained muscle.

Which, when you think about it, is the story of the Cardinals’ season thus far.